The Kindle Experience aka Sweating in Atlanta

About ten days ago, I texted my sister in law asking if she's read The Testaments yet. It's the follow up to Handmaids Tale. We've both been waiting excitedly on our respective library copies to become available.  Last time I had checked three weeks ago, I was 32nd on the waiting list. Somehow, half a day I texted my sister in law, I received notice that a copy had become available. How that happened I don't know, but I rushed to library and picked it up. I was excited not just because I was really looking forward to reading it, but also I knew that I'd be getting a plane to the east coast in a couple of days and it would be the perfect airplane reading material.

Well, a day later Leslie and I came home to this. 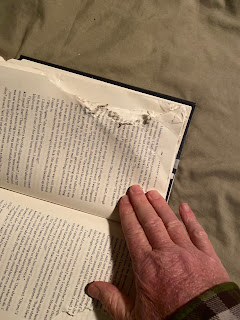 Gracie is 12 and is in pretty darn good shape.  She's always been a sneaky paper eater. But as she gets older, she is no longer clandestine with paper and cardboard eating. She's even added wood into her culinary mix. If we're home and we don't know where she is, there is a 50/50 chance that she is destroying something.  When we came home from being out for a few hours recently, she had started eating The Testaments plus some other books. I was pissed. Wtf, Gracie!? I didn't talk to her for almost 24 hours, the longest I have ever gone without talking to her.

With the hardcover book gone I decided that I'd just take my Kindle with me on the trip.  I had recently started It Can't Happen Here by Sinclair Lewis.

I. Orange County to Atlanta to Orlando

On Monday this week, I flew to Orlando on Delta. I had a short layover in Atlanta, where I changed planes. I landed in Atlanta with about 40 spare minutes until my next flight. I had a quick bite to eat at a TGIF in the airport (coincidentally, two days earlier I jokingly suggested to Leslie that we stop at a local TGIF (Thank Goodness It's Friday) for lunch). Neither of us had been to one in ages.

I paid for my food with a credit card. As the server was ringing me up, I was holding my wallet.  I began anxiously searching for the credit card I wanted to use to pay. It took me several seconds to realize I had already given it the server. Chemo brain and loss of cognitive function has me forgetting much lately.  I breathed a sign of relieve when I realized that I hadn't lost my card.

As I walked to my gate, I thought how it's kind of funny that I was forgetting things, thinking that it makes me into a kindly old man in training. While walking I was hit by a figurative loaded large sized suitcase, realizing that my Kindle was still in the seat pocket of my previous plane. I asked the agent at the desk at my gate if I had time to go my previous gate.  I was told no, that we'd be boarding in a matter of minutes.  But the agent called the previous gate and was told that no one had turned it in.

I was instantly sad and pissed at myself. Being forgetful had instantly become no longer amusing. As I waited for my boarding group to be called, the pilot came on the P.A. system and announced we had about an hour delay, as maintenance needed to fix a small oil leak on our plane.  Yes! I thought I can go check on my Kindle.

I got on the in-airport shuttle and went back to the terminal and gate I had arrived at.  I arrived at the gate to see folks deplaning from a new arrival. My previous plane had already left.  I asked the gate attendant if any one had turned it in.
"sorry but no"

Damn. I then saw that my next plane was already boarding. I got back on the shuttle and hauled ass back to the other terminal. Apparently instead of making people wait while the problem was resolved, Delta rounded up a replacement plan. I called Leslie and told her what happened and how sad I was.
"Isn't it old?" she asked.
"yep"
"was it expensive?" was her follow up.
"No, I bought it years ago from Amazon for like $29. And I only use it for reading, so there's not a lot of stuff on it"
"well, then don't worry about it" Leslie said.
"I know I should let it go, but I'm really sad about it and mad and I'm going to try not to cry right here in the middle of the airport"

It's been an emotional challenging time of late.  My emotional stability has been tested as I deal with back problems.  I've heartbreakingly lost a handful of people in 2019 (not all to myeloma) and it's taken it's toll. But I've tried to be strong and stoic. I told Leslie that Gracie eating my book followed by losing my Kindle might be the straws that broke the camel's back.  All the heartbreak was being transferred to the Kindle loss.

I boarded the plane, got to Orlando and had slightly recovered from the initial slap of the Kindle experience. I had dinner with some friends and went to sleep. I had a large myeloma meeting the next day. At dinner I relayed the Kindle story to all who asked how my flight was.

The next day I awoke tired and sad.  I got myself ready for the day. I checked emails before leaving my room and saw an email from a thoughtful Delta employee named Paige.  Here is our communication:

I told a friend at the meeting, and texted Leslie and my mom the good news.  I would be flying home through Atlanta the next day and figured I'd have plenty of time to get it during my layover.


III. Back to Atlanta

To allow me to move around the Atlanta airport quickly I took advantage of the free bag check at the gate. So when I arrived in Terminal T, I power walked to gate A-21. The agent there had not seen the Kindle and kindly suggested I go to customer service across from A-18. After waiting in line for 15 minutes I told the representative what had happened. She brusquely said they didn't have it and that I needed to go to Lost and Found. I tried to show her my email exchange with Paige and asked if she could check IFS, whatever that is.

"nope Lost and Found. It's by baggage claim"

Incredulously I said: " You mean I have to leave the terminal and then go back through security"

"Yes. Is there anything else I can help you with?"
"Please, can't you just check here for me"
"No"
"Well I have a plane to catch, do I have time to go to lost & found and then come back through security?"
"Probably not. Do you want to change flights"
"Huh? Of course not. I just want you to check here for me. Please"
"Lost and found. Next in line"

I stormed off, saying "this is fucking ridiculous" 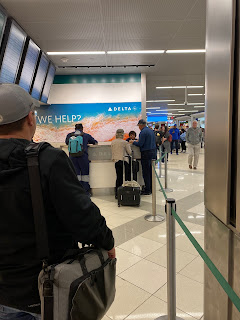 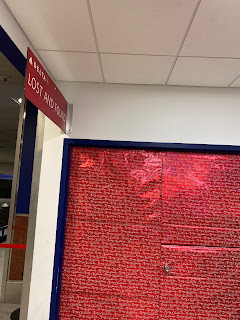 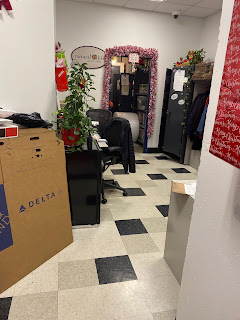 I checked the time and saw I had 45 minutes, I was going to give it a shot. I motored and got to lost and found in 10 minutes. But I was told I needed to go to Delta lost and found?

Whoosh, I ran from there to Delta lost and found, where no one else was in line and three people were working. I asked and they said they could check, but the one person with the key to the door to lost items was in a staff meeting. I pleaded with them and they called someone, who within minutes was there and searching lost and found for me.  My Kindle was not there and in fact, it wasn't even logged in to their lost items notebook. A similar item was there, but mine is purple and that one was black. By then I had 15 minutes until boarding.  I ran to security. Fortunately, I have TSA pre-check and got through quickly.

Customer service was next to my departing gate and only had one person in line. 3 representatives were working. By now, I was sweaty, panting and pissed.  I saw the person who had initially helped me, look up.  She then whispered to the other rep, who then whispered to the 3rd rep.  A rep freed up but didn't say next in line when it was my turn. So I took it upon myself to walk up to the counter.  The rep looked up at me and said she was busy.

"Ok I understand, but I just have a quick request"

I really was hoping that perhaps they could take a quick look for it, just one time. I got no response from the rep, who picked up the phone and dialed and I stood there with a powerful feeling of defeat. I wanted to scream. Right at that moment, on the P.A. system my boarding group was announced. Damn. As I walked to gate, I loudly shouted in the direction of the initial first rep I had talked with. She was ready helping someone.

"thanks for nothing Michelle! It wasn't in lost and found"

She looked up at me and said nothing.  I boarded the plane.  On the flight I had a beer and a 5 mg edible. There's no way in my sweaty and agitated state, that I would last sitting on a plane for 4 hours. I began to worry that I might be one of those people on the plane who flipped out and they'd have to turn the plane around. I repeated silently to myself:

The Kindle was gone forever. Ugh,

I called Leslie right before I boarded and told her that I didn't have luck. I had been texting her, my mom and a friend with Kindle saga updates.  She said sorry but that I had to let it go. I sent one last message to Paige:

When I arrived home, Leslie and I sat on our bed to talk about my trip and her couple of days. I adjusted a blanket on the bed and there lay a brand new and improved Kindle that she had rushed out to purchase, so it'd be home before me. I was elated, touched and happy. 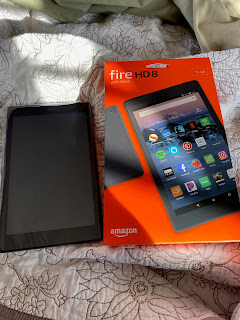 The next morning, I had another email from Paige. 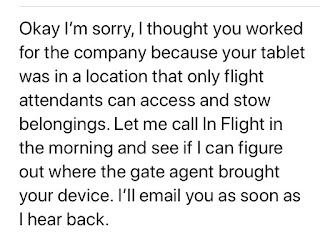 I left home early the next morning to fight LA Traffic for both Berenson and kidney doctor appointments. It's a 30 mile to Berenson and took two hours. Both doctors, by the way, are quite happy with how I am doing, almost 9 years into myeloma including 3 years on Darzalex. In fact, my kidneys are operating at 33 1/3 percent...which is a record for me, since being diagnosed. 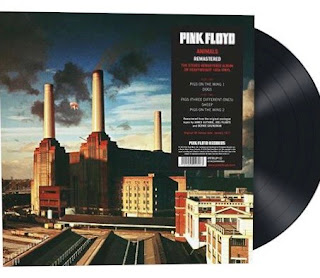 That night after a two hour drive back home and meeting my doctors, I had one last email from Paige. 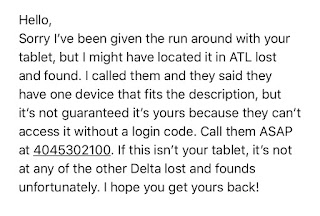 I already knew there was that one in lost and found and that it wasn't mine. So my last and final option is to file a claim with Delta.  Perhaps it will show up some day.  But at the very least I saw the there are nice people out there, Paige especially, and that Delta, aside from the "customer service" reps, was a pretty wonderful airline. Positive experience almost all the way around.


at December 13, 2019
Email ThisBlogThis!Share to TwitterShare to FacebookShare to Pinterest