This is the second year in a row that this conference is virtual. It's still one of the best conferences out there.  Follow this link to register for free.

at January 12, 2021 No comments:
Email ThisBlogThis!Share to TwitterShare to FacebookShare to Pinterest 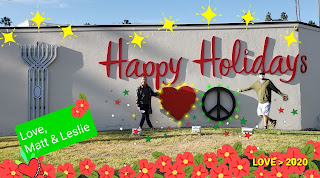 Well, well, well. Happy holidays and happy new year.  New Years Eve of all holidays is probably my least favorite. I mean, I'll take a celebratory Arbor Day over New Years Eve any time. New Years Day? It's ok I guess, because of football. But that's not even the same this year. So we'll be low keying it. Really I'm just glad that 2020 is fricking over. This year has been one huge piece of do do.  Myeloma-wise I'm fine and dandy. Feeling good. Mentally, I'm good. But I will say that as I rapidly approach 10 years since diagnosis, my general approach to everything has morphed drastically. Having said that, I'll do what I need to do to keep this good run going. But, meh, is it normal for a nearly 60 year old to be having an existential crisis? And what really matters to me?

May 2 is that ten year anniversary. I'm figuring out how to do a virtual fundraiser for Berenson's non-profit research arm, The Institute of Myeloma and Bone Cancer Research, IMBCR. I'm almost there with setting it up.

Um, I really don't like writing about or thinking about myeloma. As I said, I'm doing well, but survivors/doing well guilt is pretty intense.

I continue to have increasing incidents of what you might call spiritual how do you do's. Definitely gets me thinking. I'm not going to start preaching or anything like that, but it's likely I'll be more thoughtful and deliberate about my actions. Put aside the previous paragraph for a moment and I'll say it's fairly miraculous that I'm still alive and kicking and I'm not going to ignore that fact, and I should maximize the gift (good luck) that I've been handed.

And that's all I got. Oh..this past summer I debated abandoning the Vikings. I couldn't do it. But I no longer sweat each game, instead I embrace the interconnectedness of my life with the team. We are one. One are we.

Well, hope you all are well as can be. I appreciate you all tremendously. Hugs and love. 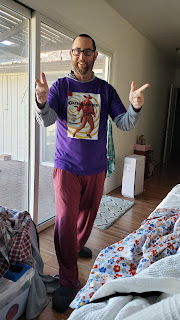 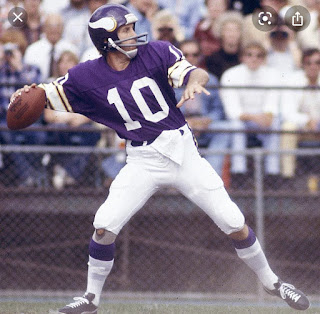 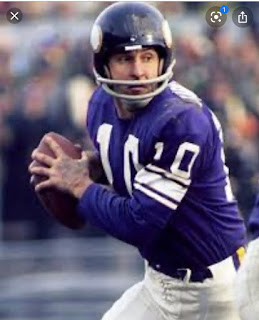 at December 30, 2020 No comments:
Email ThisBlogThis!Share to TwitterShare to FacebookShare to Pinterest

Before I get to the good stuff, an update. Berenson did a bone marrow biopsy last week. He called with the results just as Leslie and I were lighting night one Chanukah candles. The timing was serendipitous, perhaps even miraculous, much like Chanukah. Turns out I am in complete response. No detectable myeloma in my marrow. For context when I was diagnosed nearly 10 years ago, my marrow was 70% myeloma. It's an understatement to say this is huge news. This is the best condition I've been in since diagnosis. 4 years on darzalex and pomalyst are still doing the trick. Having said this, I still have to do my usual treatment; monthly infusion plus daily chemo pill. That's the nature of myeloma. It's hiding somewhere at a cellular level. The goal, therefore, is to keep the current regimen working as long as possible.To cap it, though, I feel great.

Also of note, in May 2021, it will be ten years since that fateful day. It'll be a big celebration no doubt and I'm planning to raise some money for the Institute of Myeloma and Blood Cancer Research, which has been instrumental in me being alive and kicking. More on this in coming weeks.

With that out of the way, on to the important stuff.. For most of my adult life, I've lit the menorah for Chanukah, but not really knowing why other than it's tradition. Last year I made my own menorah. This year, I made a new menorah and since we're on lockdown here, we decided to do a deep dive into Chanukah, family history and tradition. It became a virtual family celebration and was special beyond words. With that, here are some photos from the past 8 days. 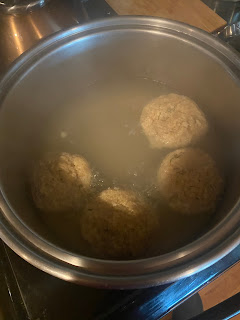 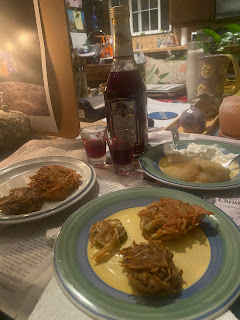 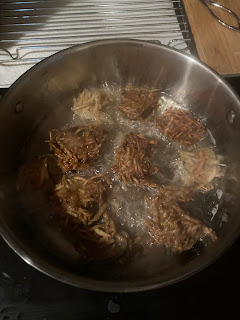 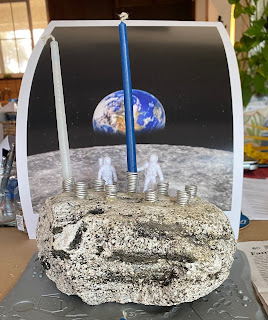 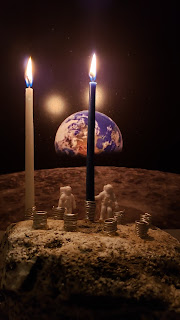 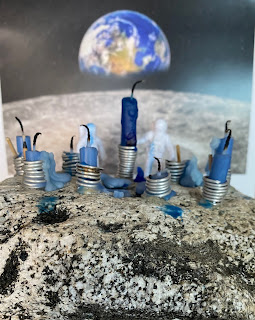 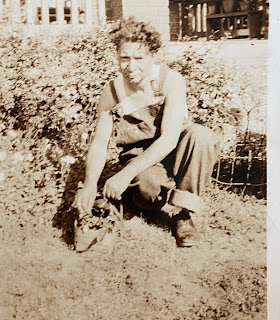 My Great Grandfather Papa Jake, circa 1934 in New York 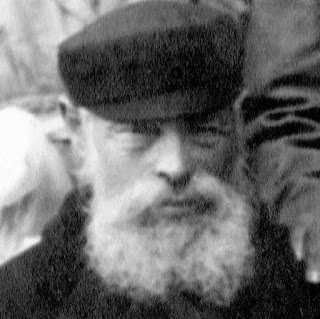 My Great Great Grandfather, Shopsa, circa 1880 in Poland

From the New Yorker: What If You Could Do It All Over Again

at December 16, 2020 No comments:
Email ThisBlogThis!Share to TwitterShare to FacebookShare to Pinterest

Interesting StoryTitled: Why I Lie About Being Disabled.

It's been about three years since I retired/went on disability. I still hesitate when someone asks what I do. Or I lie, such as when the familiar check out person at the store asks if I'm on my way to work. I just say yes..ignoring the fact I might still be in my pajamas and half asleep. I worry if I say I don't work and I'm on disability, I'll get the pity look and "I'm sorry". And I worry that if I say I'm retired, I'll get "lucky you" or "wow, you're young, you must be loaded".  In fact, when I first stopped working, the office manager at Phan's office told me how lucky I was and they wished they could retire. I had just received a full dose of dex and I sternly let the person know that I'm not lucky and I'd gladly not have cancer and still be working. Yes...I called soon after to apologize.

Anyhow, I found this story apropos:  Why I Lie About Being Disabled

at December 08, 2020 No comments:
Email ThisBlogThis!Share to TwitterShare to FacebookShare to Pinterest

Ten years ago, I was feeling on top of the world. I was 49 and thinking about a momentous 50th birthday celebration. My long time foot issue was finally healed. I had a job I liked. Leslie and I were happily living together. Gracie was already proving to the best companion I could ever hope for. But I imagine I was also starting to feel some fatigue and energy loss. I had given up eating meat and I initially chalked up the fatigue to not getting enough protein. It was hard to imagine that just a few months later, I'd be hospitalized because I was severely anemic and shortly thereafter diagnosed with multiple myeloma.

Fifteen years ago, Hurricane was still around. Gracie hadn't entered the picture. Hurricane (nee Champagne) was the opposite of Gracie. Yes, loving. Yes, she was my baby. But Hurricane was a lady. Very dainty, very mellow, very sweet. Gracie was a lovable oaf. Klutzy. No respect for personal space. Fifteen years ago, I was also doing pretty well. In late 2004, my stepfather, Ed, passed away. It was really my first experience as an adult with someone very close to me dying. I knew I was supposed to be sad, but I wasn't sure how that sadness was supposed to manifest itself.

When I was diagnosed and rather sick, I had a lot of dreams with Ed in them. The specifics varied but generally, I'd dream that I was trying to get somewhere and Ed kept getting in my way, throwing up obstacles.  The dreams were vivid, and I took them as a sign that it wasn't my time to go yet.

Lately, I've had dreams with Hurricane in them. And in my waking hours, I often think I see Gracie roaming the house and yard. I swear she almost tripped me the other day. She loved to be underfoot.

I've done a lot of dumb things in my life and made some mistakes. But generally things have worked out for me. I'd have to scratch and claw a little bit, but I'd also often have an easier path than perhaps I'd earned. And I'm not so sure that has been a good thing.  I'm not sure I always considered others. Suffice it to say, I was decent at thinking about me and shirking responsibility.

Also, suffice it to say, I waited for things to happen. Despite having a degree in planning, I really wasn't great at planning. In fact I was horrible as planning (my life that is) I'd go with the flow. I'd follow my gut. I'd act (out) on emotion. I mean that's what Malcolm Gladwell said to do. Right?

Now as I inch up on ten years with myeloma and rush to 60 years old, I'm finally putting some thought to future plans. What lessons can I glean from Gracie, Hurricane, Ed, and others people and animals who have influenced me.

I passed four years on darzalex in November. It continues to easily be the best drug I've been on. Thank you darzalex! A few months back, I did a lot of tests for a rheumatologist. I was constantly achy, sore, tired and low energy. All the tests showed nothing other than a 59 year old body that had been beat up by steroids and toxic drugs. But we also identified depression as contributing to my overall feeling of fatigue. We switched up my anti depressant medicine and it's made a world of difference. My attitude has definitely been upgraded. It's also made me see that depression wasn't something that cancer brought about. Clearly for decades, I'd experienced mood swings and roller coaster of emotions that played a role in my actions.

Nonetheless, I'm doing good, feeling optimistic and trying to plan out what my next year or years or decades look like. I've been seriously addicted to westerns lately, and I imagine what it would be like to be a modern drifter with a horse, a dog and a fiddle. The late 19th century must have been wild. There was still the wild west, while at the same time, cities were industrializing and building bigger and higher. I also wonder when and how the switch from whale oil to petroleum took place. What a game changer. Neither option has been the best for the planet. It's no secret that Carl Safina is my idol and his writing has influenced me hugely. His description of sperm whales and their intelligence and family structure is eye opening. His writing motivated me to read Moby Dick; finally. It's a slow read, but a great read.

I'm waiting on my most recent lab results. I'm certain they will be fine. And I'm certain that next week I'll do my monthly darzalex infusion. Cruise control as Dr Phan says. With the pandemic, traffic around here has been minimal. My 30 mile drive to Berenson's office takes only 30 minutes now. Pre-pandemic, it would take up to 2 hours regularly. Because of the short drive, I'm pondering doing my infusion at Berenson's office. It's a bit calmer, more spacious and quieter at Berenson's office. And if myeloma and the pandemic have taught me anything, it's that I like alone and quiet time. We'll see how this pondering turns out.

at December 03, 2020 No comments:
Email ThisBlogThis!Share to TwitterShare to FacebookShare to Pinterest

at December 02, 2020 No comments:
Email ThisBlogThis!Share to TwitterShare to FacebookShare to Pinterest

Updates in Myeloma from Cure Magazine

at November 27, 2020 No comments:
Email ThisBlogThis!Share to TwitterShare to FacebookShare to Pinterest

This should be a good one, Saturday November 21. Click here for free registration and more information.

at November 18, 2020 No comments:
Email ThisBlogThis!Share to TwitterShare to FacebookShare to Pinterest

at October 29, 2020 No comments:
Email ThisBlogThis!Share to TwitterShare to FacebookShare to Pinterest
Older Posts Home
Subscribe to: Posts (Atom)

This is the second year in a row that this conference is virtual. It's still one of the best conferences out there.  Follow this link ...