Let's Talk About My Kidneys

When I was diagnosed, I had been in the hospital for about a week; kick starting my absolute hate of being hospitalized. But who likes it? While there, I had a kidney doctor come in and ask me if I realized my kidneys were failing. How the fuck would I have known? His bedside manner sucked.  I saw him for a month or two after diagnosis, but ending up switching to a new kidney doctor. He was unavailable, bereft of information and generally phoning it in, at a time when any new patient was scared and needed support.

Kidney doctor two was ok, technically speaking.  But she talked about me dying a lot and was really gloom and doom. In that first year when we were trying to get control of the myeloma, my creatinine soared to over 8. Per the tables, the 8 meant that my kidneys had failed and I needed to be doing dialysis.  She pretty much strong armed me and Leslie into getting a fistula in my left wrist. She scheduled me for dialysis at 5:00 AM without even consulting with me.  I wasn't symptomatic for failed kidneys. I was peeing, no swelling, no lower back pain. So instead, we educated ourselves about being on a strict renal diet (that would also give me needed energy to help fight the cancer and counteract the chemo) and we did an occasional saline infusion/flush that would take several hours.  On a happenstance walk through a dialysis center I decided that right then and there...and to this day....that is a line I won't cross. Fuck that shit I said then and I say now.

Anyhow, her doom and gloom act got real old and we again switched to a new kidney doctor, aka nephrologist, at Cedars Sinai.  By then we had some traction with beating back the myeloma, so my creatinine started to drop, meaning kidney function improved.  I stayed on the renal diet, minimizing foods with high phosphorus and/or potassium) and the kidneys continue to hang tough.  Eventually though,  I decided to switch kidney docs one more time, for a few reasons.

My doctor for the past three years has been Froch, also at Cedars, and he is the best.  When I became refractory to velcade and revlimid in November 2016, I switched to my current regimen of darzlex and pomalyst.  Lo and behold, with that switch, my kidneys made another dramatic improvement in function.  Enough so that my creatinine dropped to mid 2s, I'm out of failure range and I've basically scrapped the renal diet. A massive plate of nachos followed by pizza the next day were my first dietary splurges.  Sadly, the result of this dietary switch is I am now a fat fuck. I have to lose 20 pounds. I had my quarterly visit with Froch earlier this week and he noted my belly. Leslie made sure he was aware of how far I had strayed off the renal diet. His suggestion was that I go make onto a modified renal diet, even though they operate at abotu 37%,  and I make sure I am babying those kidneys and cutting calories. Makes perfect sense. If at some point the myeloma re-energizes I need those babies filtering shit out like the champs they are. No more potatoes, no more ice cream, no cheese, no cholocate, no stuff that is so delicious. That sucks but it's also fine but oh boy, just 4 days on this low carb (for my weight) and renal diet has me super grouchy.  Add into the mix the dex I am getting today with my monthly darzelex infusion and I'm going to be a real bitch the next couple of days.

Also note, that because of the never used fistula, I shouldn't do blood draws (or blood pressure) from my left arm and the veins in my right arm are tapped out.  When it is labwork time, I have to go to Phan's office and blood is drawn from my port.  Froch likes to check my parathryroid and I forgot to have this test done with my regular labs.  The damned fistula doesn't even work anymore, so I allowed him (and only him) to use my left arm for a small blood draw.

I bruise like a mother fucker. and I knew a left arm draw would leave a bruise. It's a bit bigger than I expected and I am wearing long sleeves for a couple of days.

Lastly, Froch's office has great views, so that in combination him being my favorite nephrologist,  I don't even mind (too much) waiting around in his office. 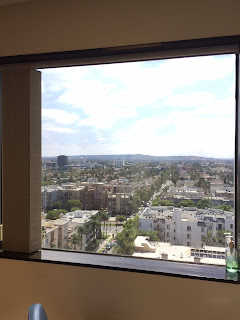 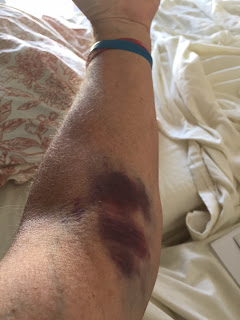 at September 07, 2018
Email ThisBlogThis!Share to TwitterShare to FacebookShare to Pinterest