This photo is of the second to last step of my infusion today. It's the flush of the port at the end of day one of cycle 16 of my latest cycle of maintenance routine. A cycle is a month. Note that there has been countless other regimens over the past nearly five years. So total cycles for all treatments is an unknown number to me. I suppose I could calculate it, but there is no point. 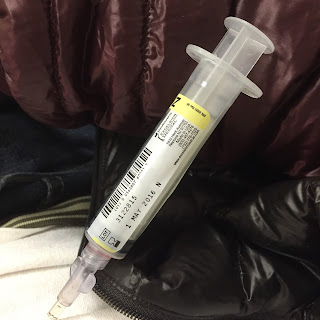 I'm wide awake from the dex. I tried a different sleep aid tonight and it has had zero effect. My mind is spinning widely.

I'm thinking about my brother and sister in law, who have been faced with one family emergency after another. My sister in law's sister in the hospital, struggling against her lifelong diabetes....another horrible disease. My sister in law has lost both her parents over the past 18 months. Truly sad. But my sister in law carries on in a way that I'm not sure a lot of people could do.

My wife has been sick for a few days with some kind of flu. She's finally feeling better. Gracie, my pup, has an odd fear of coughing. So anytime my wife coughs, Gracie freaks out and leaves the room. Then she comes back. Then there is another cough and she leaves again. So all night I am hearing the click clack of Gracie's nails on our faded hardwood floors.

I'm sick of myeloma at this point. Not the myeloma itself. As I said before I'm at a comfort level with it. It's the physical and mental shit that accompanies myeloma that have me angry (an anger fueled by dex). I'm angry that I'm constantly thinking about my financial future. I'm good right now...as long as I am working. But what about later, when working becomes too much of a chore?  I'm most angry at myself, as I think about and regret and re-regret past decisions I've made that I can't get over right now.  I've decided that I'm a horrible decision maker. I need to adopt the George Constanza of Seinfeld approach, where I do the exact opposite of everything I'd normally do. It seemed to work for him.

I visited my mom for Christmas. We went to her neighbor's for Christmas. I really enjoyed it. A diverse and interesting group of people. It reminded me that I need/want to be more interesting. I've carried a fear my whole life of being an uninteresting older person and I think I may be on my way. I'm thinking about getting a new mountain bike and riding again. A friend goes to the nearby trails on weekends and I think I'd like to join him.

Over the next two weeks I have to see my dermatologist. I know that she'll burn a few pre-cancerous spots off my face. I'll also be seeing the ass surgeon soon. About two years ago I had the most miserable experience of my life at his hands. Because of my lowered immune system, I'm prone to warts and skin viruses in unmentionable places. I'll tell you this, there's probably nothing as humiliating as someone staring up your ass, taking notes.

Before I was diagnosed, I had basically zero exposure to cancer. My perception was very black and white. I thought you were either cured in a few months or you died. Boy was I wrong. Myeloma just keeps giving. Mind you, I know I'm fortunate. I'd doing really well. I'm working and living and planning on getting jacked...lean and mean... in 2016. But if I'm being honest, I'm a tinch envious of other cancer patients, who get sick then several months later are well. I don't say this much, but it's a bit unfair. And I feel like an asshole for even expressing these feelings.

I miss my friends. I miss being able to do whatever I want, going wherever I choose...without having to consider my treatment and doctor schedules.  I can't miss treatments. I never achieved complete response or remission. So delayed  treatment would mean the resting myeloma can go nuts. I'm going to meet my friend David Saturday to hang and watch some college bowl games. But in the back of my brain, I already know that after about 3 hours I'll need to get home for a nap. And that a couple of beers will mean I'm exhausted Saturday night.

On the positive front, the Vikings have qualified for the playoffs. I love this year's team. Super Bowl visions occupy about 15% of my awake time every day. The game is in the SF bay area this year. So if the Vikings make it, you know I'm going. Of course writing this has now jinxed the prospects. I'm up for a new job at work. It's something I'm pretty certain I should get. Again though, I shouldn't write or talk about it...lest I jinx the whole thing. I have a host of conspiracy theories about why I might not get it. I can get a decent level of paranoia going on certain things. This is one of those.

This time of year at Dr Phan's office is always busy. With holidays, people try to squeeze in their infusion treatments. The Dr has a fair amount of newer patients. Not all are doing so great....as far as I can tell, but you never know. Sometimes, like today, it kind of trips me out that there I am. Hooked up, getting chemo drugs infused through a port. I ate cheezits and watched a bowl game on my ipad. I used to sleep under a blanket, so I've definitely improved and made progress. But still it's an odd feeling if you really stop and think about what you're doing. I try not to.

Well, it's time I try to get a little sleep. Don't worry about me. I'll be fine. Just unloading my brain. I guess that's why I better find a new therapist...tout de suite, aka double time in French.

at December 30, 2015
Email ThisBlogThis!Share to TwitterShare to FacebookShare to Pinterest