Yesterday I had my last day of this current chemo cycle.  Now I get a two week break. Just in the nick of time. It's time to let my body rest.  Folllowing chemo,  I came home took a nap and then headed up to West Hollywood ( 30 miles aka hour and half drive from home) for a fund raiser at a bar called the Surly Goat.  Shmaltz  Brewers (maker of He Brew and other beers) has a connection with myeloma and the Institute of Myeloma and Bone Cancer Research, Berenson's non profit. They've been doing these events across the country.  Let me say what a seemingly great job these beer reps have. They promote their beer, do events and get to laugh at their job.  Not a bad gig. Perhaps I've found my post port planning career. Anyhow, I went with Matt and he was my designated driver. Not that I got stinking drunk, but my tolerance is not what is used to be. What's also interesting is that Dr. Phan, a non drinker himself, has always told me not to drink. He says it supresses the bone marrow's blood making capabilities.  But Dr Berenson, when I saw him last week, wanted to make sure I was attending so I could have a beer with him.  And here's photographic evidence that Dr B is a real person.  He wore jeans and a plaid shirt, just like a regular guy. Like all things myeloma, different mind sets by medical professionals.  And that's my job, to sort it out. In this case I sorted it out by deciding a couple of beers or three is ok. I also decided that stopping at Canter's Deli on the way home for a black & white cookie was also ok. BUT, they were all out, so I settled for a backup cookie. Good, but not the same. And now, it's 4 am and my dex insomnia is kicking in.  Just as well, I'll go the gym soon. Sweat the beer out. Later today I am meeting some UCLA to watch today's game.  Today I might pass on the beer though.  And Sunday is the key day. Vikings first regular season game of they year. So excited! 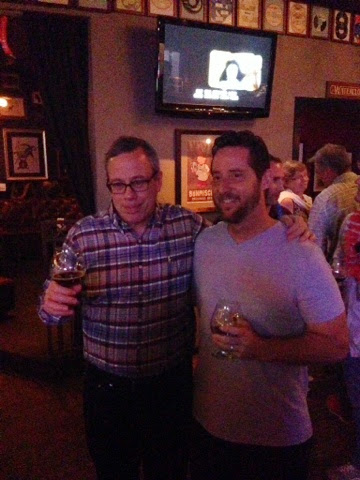 at September 06, 2014
Email ThisBlogThis!Share to TwitterShare to FacebookShare to Pinterest