After I was diagnosed in 2011 with multiple myeloma, I was in and out of the hospital with fevers and/or severe anemia. I fucking HATED the hospital. I will say that, fortunately, the oncology floor at Long Beach Memorial provided private rooms for their cancer patients. I'm sure it had to do with our lowered immune systems. But it made it slightly tolerable. They had crappy tv's in the rooms on which I would watch ESPN nonstop, checking to see if the NFL lockout had ended. I remember very specifically being disappointed that I might not live to see the Vikings win a Super Bowl. By the way, I'm still alive and still waiting for that Super Bowl win.
Also when diagnosed, I started binge watching Breaking Bad. My favorite show ever. Better Call Saul, Lost and the Mary Tyler Moore show are on the top ten list. Now that Saul is over and with some subtle prompting from my brother, I am rewatching Breaking Bad. I'm on season one and, wow, I am reminded of how great it is and how it really resonates with me. For me, it was the perfect show at the time.
Without spoiling anything for those who haven't watched it but are planning to, here's a brief synopsis. Walter White is a high school chemistry teacher. He is diagnosed with lung cancer and turns to making meth as a way to make money for his treatment and his family. His reactions to his cancer, regrets about his life and how his loved ones reacted to his cancer are all there in season one.
While I was bingeing the show, there is a scene in one episode where Mr. White is telling his class about Thalidomide. It was used to help pregnant women control nausea in the 50s and 60s, but was shown to cause severe birth detects and was stopped being used. However, some years later, it became a successful chemotherapy drug for certain cancers, including myeloma. I'm pretty sure I watched this episode at the exact time we were trying Thalidomide to try and reign in my myeloma, which at the time was out of control. It was a scary drug that you couldn't touch with your bare hands, even though you were swallowing it. It didn't work for me. The first drug that had any traction for me was Bendamustine (aka Treanda).
Most impactful for me was Walt discussing how he wanted to make choices for himself and live his life his own way. This is what I am working on. Well, I've been working on it most of my adult life. I'm not going to start making meth, But of late, it feels like a ticking clock is telling me to hurry up. Pre-cancer, I had visions of being a Nevada real estate mini-magnate, with my home in Green Valley or Summerlin. I felt like perhaps I was on my way. I've written before about my love of Las Vegas. I had a couple of unsuccessful job interviews there back in the day. (And as a reminder, 3 important things to me are the Minnesota Vikings, Las Vegas and animals) Myeloma and life interfered with my progress of being a mini-mogul.
I finally found a cancer focused therapist. She's ok I guess. But a little too much of the toxic positivity. Things aren't always so simple as just doing it.
Leslie and I have a bit of a lizard habitat in our back yard. We've been seeing a number of babies roaming around. They're pretty darn cute. The other day I was sitting out back and out of the corner of my eye I saw something move. I turned and saw a very small and very thin baby lizard. It was moving it's head around but stood very still. I tried to give it some water and some bugs and it didn't budge, so I left it alone. We checked on it about an hour later and it was dead. Still in the same spot. I'm pretty sure our lizards are Western Fence Lizards and I remember reading that up to 50% of hatchlings don't survive. I shouldn't have been surprised that it didn't make it. But seeing the dead baby lizard really was heartbreaking. Really.  I felt so bad for the little creature. And, don't judge, I did give it a simple burial, next to a ceramic lizard that Leslie bought at a farmers market a couple of years ago. Ugh, cancer has made me so emo.

One more note on animals...There is a place called Oscar's Place . They rescue donkeys that were destined for the slaughter house. The guy who started this non-profit has an inspiring back story. It's worth checking out. If I had the energy and health I'd like to volunteer for them. They're located in Northern California, off the beaten track and a good distance away from the medical infrastructure I need.
And finally, in case you're wondering, my nephew made my annual Vikings winning the Super Bowl bet. 40-1. I think this is the year. Scratch that. I know this is the year. Week one, they destroyed the hated Packers. And let's not forget how in 2009, all onetime packer Brett Favre had to do was fall down and the Vikings would have been in the Super Bowl. Argh!! Speaking of criminals, has any one been keeping up with the news on how the same Favre personally profited by participating in a scam to take welfare money? 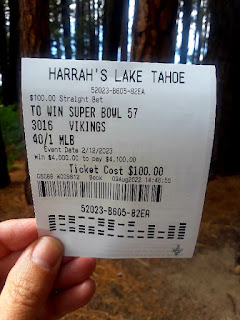 And that's my update. Myeloma-wise I'm good. Knock on wood, Darzalex and Pom are still doing the trick. Coming up on 6 years on this regimen. Yahoooo!
Vote yes on 27!!
at September 16, 2022
Email ThisBlogThis!Share to TwitterShare to FacebookShare to Pinterest