I was 49 when diagnosed. I'd never really been sick before. I was riding my bike to work every day, 20 miles round-trip. Life was grand. Then BAM. A major life change smacked me right up in my grill. My goals since diagnosis have been:

-keep it going for a long ass time.

As I hit 59 years old and rapidly approach 10 years living with this disease, I'm planning to keep it going for a long ass time. Let's review the latest and greatest. But first, the import stuff. 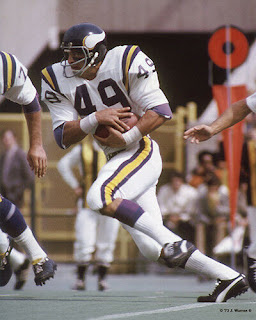 49 for the Vikings is Ed Marinaro. He was the runner-up for the college football Heisman Trophy in 1971. He played 6 seasons for the Vikings, including playing in two Super Bowls. After football, he starred in Hill Street Blues. Also of note, in the early 1980s, as I mentioned many, many posts ago, I had a huge crush on Lisa, who years before was a regular dancer on American Bandstand. Sometime before her brief time "dating" me, she dated Ed Marinaro. That absolutely got into my head. Lisa was best friends with Debbie, who passed away from myeloma a few years ago. Debbie was great friends with my Uncle Jan, who I worked for in the early 1980s driving a truck. I loved the freedom, but driving motivated me to go back to UCLA. 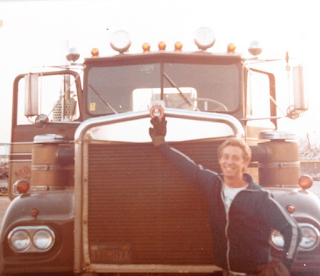 59 for the Vikings is Matt Blair, who played outside linebacker for the Vikings from 1974 to 1985. He was a key component of the Purple People Eaters and really really ought to be in the Hall of Fame. 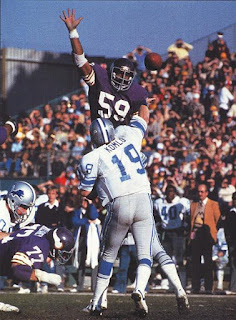 Now let's get to business. I'm turning 59. My 50's have been a whirlwind and a blend of crap, lessons, ups, downs, and lots of self talk. Putting the global pandemic aside. 2020 has been a shit year. The loss and heartache has a whole lot. It goes without saying, but I'll say it anyways, losing Gracie continues to weigh heavily on both Leslie and me. I carry guilt and pain. It's been suggested by a host of folks that getting another dog would help the pain. I agree. But I am definitely not ready. It's gonna take time and it's gonna take a change in scenery. Before Gracie, there was Hurricane, who also went way too soon. I'm not one for curses and evil spirits, but I'm leaning towards the previous owners of my house leaving some kind of bad juju in this house. Seriously. And this year, I've lost friends who meant a whole lot to me and were beautiful people.

Also to the folks who got worried about me based on a couple of previous posts. Absolutely I am fighting depression. But also absolutely, don't worry, I am fine. Times are challenging. Most of the time I am positive and as carefree as possible. As possible is the operative phrase. As possible seems quite challenging of late. But I'm walking a lot and doing a lot of self talk and being more open with key people and it's getting me through.

Myeloma-wise I'm in great shape. I've postponed two months running a bone marrow biopsy from Berenson, which will give us a baseline on plasma cells in my marrow, while I'm at my best. But, I'm doing so many darn tests for the rheumatologist and having a couple of skin cancer removals, that adding drilling into my hip seems like something I can put off for another month or so. Yes, I feel great. But every 3rd or 4th day I have body aches, fatigue and general feeling yucky. That's what the rheumatologist is trying to get to the root of. I will say that the aches and such do slow me down but don't really stop me from doing anything. Nothing that a 2 hour nap can't take care of.

My vision keeps changing. My current prescription definitely isn't sufficient. Two years ago, I got progressive lens which have been life changing, but again with the pandemic and all the other medical stuff, I'm not inclined to go in for an eye exam.

Leslie continues to keep me safe. Chemo brain has absolutely set in, meaning short term memory is fading. She keeps me honest and safe. I miss my mom tremendously. She's now in Colorado and I'm trying to figure out when and how to visit sooner rather than later.

The Vikings..don't ask. I almost abandoned them this summer, but I couldn't do it. Instead my love/obsession is stronger than ever. They kind of suck this year, but that's ok. That's my team. Last week we met a server at a local place where we got food to go. He was born in Russian, raised in Minnesota and now lives here in California. We had a nice chat about the Vikings last Purple Friday and I've decided that at some point in time, he's getting all my Vikings memorabilia. He doesn't know it, but I know he'll give it all the home it deserves. I'm not sure when the gifting will happen. Probably not for a while.

I met an amazing 86 year woman at Dr Phan's this week. The bluest eyes I have ever seen and an attitude that really touched me. I could have spent the whole day with her, but no such luck. I briefly met her son in the waiting area. And I guess that's part of the cancer journey....the people. It's the people that keep me going and motivated and remind me that I'm actually doing a kick ass job. Myeloma is no smooth sailing, physically and emotionally. I'm in an emotional trough right now, but working my way out of it. Nothing that a couple of birthday beers can't help out. We're doing a belated celebration with Matt and Rich in two weeks. They've totally been quarantined, working from home and not going very many places. But with all my doctor visits of late, I feel it's best to stay away for two weeks, just to be safe. But believe you me, come October 23, we will be celebrating.

And that's my story. Blah, blah, blah. Not too thrilling. Not too exciting. But we live to fight another day. And remember: Wear a Damn Mask and Vote!!! 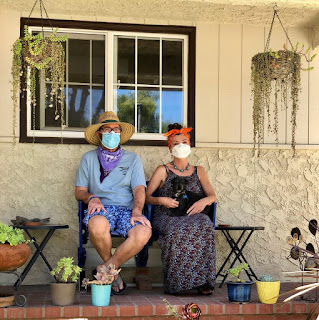 at October 08, 2020
Email ThisBlogThis!Share to TwitterShare to FacebookShare to Pinterest