You're standing awful close Gus. I can't tell if it's your toes I'm feeling or mine.

Well, well, well.  Here we are. Is this week 3 of lockdown? Is this Monday? All sense of reality is out the window.

-Talking Heads, Once in a Lifetime 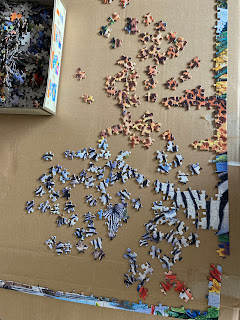 So what's been going on? Well, let's cover the boring stuff first.  My most recent labs are tremendous. Creatinine is 2.26. Parathyroid, another measure of kidney functions, is 56.  Good and good. The only thing to watch are my immunoglobins, IGG. These are low...260.  They always are. But this means my immune system is meh. But we already knew this and I'm acting accordingly during lockdown, i.e. I'm going out for a morning walk and basically never leaving home after that. This Friday is my monthly Darzalex infusion. Should be interesting. But I have no doubt that Dr Phan is taking all necessary precautions and then some. I did go into his office last week for my blood draw, since we draw from my port and the lab can't do it. And unfortunately, and like so many other health care providers, they haven't been able to get new masks for the nurses. They're having to reuse theirs. One nurse is in need of an n99, which is particularly hard to find. Maddening to the nth degree.

Now let's get down to the important stuff.

1. Lease with option to buy.

I went through my brackets to find a new NFL team for the coming year. As a reminder, the Vikings have pushed me too far. They traded Stefon Diggs, my favorite player and a super star receiver and the heart of the Minneapolis Miracle from two years ago. And also! They gave Kirk Cousins a contract extension. What???!!!! He seems like a great person, very likable. But his skills are not that great and not such that he can take the team to a championship. So I did a March Madness of brackets to find a new team. In the final four, I had the Vikings, Carolina Panthers, Arizona Cardinals, and Jacksonville Jaguars. The Panthers recently signed Teddy Bridgewater, who I love, to a contract and that put them firmly in the lead. I was close to crowning them as my 2020 team. But it just didn't quite sit right in my gut. And after sleepless nights, I went off the chart and made the Chargers my team. They're local, they have some good players and I like their colors. So that's who I'll be rooting for the most for this season....if there is a season.

Have I permanently broken away from Minnesota? Well no. But we're on a break. I'm giving the Chargers a test drive this season and we'll see how I feel not getting all emotional about the Vikings. I'll re-evaluate after the season. Lease with option to buy.

In the mid 1970s my family moved. I was a teenager, And in the new town, kids thought I looked like Gene Wilder. I didn't see it. But after several weeks of lockdown, I do see it. The change is complete. 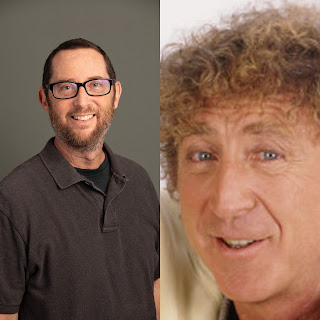 I needed something to identify me in the new city, besides being called Gene or Hollywood. So I joined the track team. I had used running as a way to lose weight, after being a chubby kid. I loved running. And it turns out I was fast. My best friend's dad called me Matt the Scat. I unofficially ran a 5 minute 10 second mile. That's moving. But when I ran track, I preferred  the jumps....triple jump and high jump. I wasn't great in either and wasn't the tallest kid around, but with the triple jump and living in a small town, I was occasionally able to eek out a third place ribbon. However towards the end of the season, we had a meet at the local community college, meaning the distance to the pit was longer. On my first jump, I fell short of the pit and sprained my ankle. Ending my season. In hindsight, why I didn't run the mile instead makes no sense.  I think the jumps were just more fun. I had read about Franklin Jacobs, a five foot eight inch high jumper who briefly held the indoor world record.  He was two inches shorter than me and I thought if he could do it, so could I.  Nope. Also of note, Jacobs developed the Jacobs Slope jumping style, which was a modification of the Fosbury Flop, created by Dick Fosbury. The Flop, in the 1960s, completely changed the jumping game. 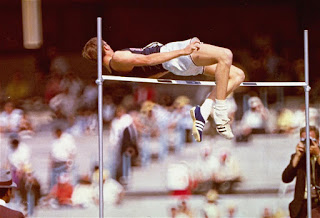 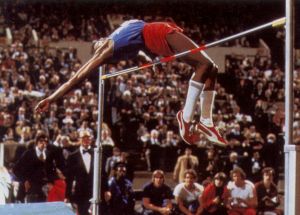 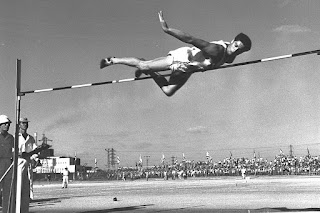 3. What else?
That's all I got. I go to bed early, wake up early and take an almost daily nap. Good stuff.

Stay safe and well everyone.

at April 08, 2020
Email ThisBlogThis!Share to TwitterShare to FacebookShare to Pinterest