2020 arrived, right on schedule.  I can sincerely and pointedly say it couldn't have come soon enough.  Frankly, 2019 sucked.  I mean, myeloma-wise, it wasn't bad. I flew right by the three year mark on my regimen of Darzalex and low dose Pomalyst. Darzalex, aka Dara, aka Daratumumab, is by far the best drug I've been on since diagnosis.  2019 started out great, I was feeling good. volunteering at a the Marine Mammal Rescue Center where they rescue sick or injured seal lions and seals. I was also volunteering with the Leukemia and Lymphoma Society. And I was living life, everyone's goal. Starting in about April something changed. l had a worrisome lab results (false alarm), followed by a mystery elbow injury, followed by a massively painful back issue that was totally new to my curriculum vitae. That back issue forced me to take a leave from feeding the marine mammals. That back issue also translated to me getting horribly out of shape given I was living sans exercise.  I also took a break from the LLS. It began to feel much like an office job and that's no longer me. Towards the end of 2019, I had a sort of aha moment, which was great, but also left me depressed and wondering what life is truly about.

Living with cancer, more specifically living 8 years with an incurable cancer, has made me more certain of who I am and gave me a purpose greater than I had known prior to diagnosis. I am certainly more understanding of the struggles everyone faces. Most myeloma patients are uniquely qualified to be a support system for others. As time goes by, most of my friends and acquaintances are myeloma patients. This is tremendously helpful in maintaining health and sanity. We're all in this together. Unfortunately, lately it's more challenging for me to speak with patients who aren't doing well. I'm just not sure what to say. There's an inherent sadness in illness.  And now, with my aha moment I've developed seemingly chronic anxiety, guilt, worry and questioning myself on everything. If you mix my anxiety with my stressing of over every single thing (small and large) and a monthly steroid induced  emotional roller coaster that intensifies each passing month. I worry that I am on the edge of a complete emotional collapse.

2020, though, should be different. I'm being serious about mind and body health, my back is improved (I'll soon return to the marine mammal rescue center (doing much less heavy lifting)). As I said, big picture myeloma-wise I'm in a healthy place.  I've restarted exercising, but I have to be a much smarter and focused worker outer. Balancing my desire to run away with wanting to live a normal life is no easy feat. I'm working to incorporate creativity into my life and that's rather exciting and motivating. I like, scratch that ...love, the organization Growing Bolder and their stories of older folks doing wonderful things.  I am quickly becoming a member of the older folks club.  And, I'm working to make it so when I pass, people won't just say "Matt...he was ok".  There needs to be stories.

My myeloma labs are still looking very good. Today I am getting my first darzalex infusion of the new year. It's also my first year on medicare and the search for finding a good supplemental plan and prescription Part D plan was, whooo wee, nerve wracking. I think I signed up for a good plan. So far so good. Leslie and I, and Gracie, are hoping to relocate in 2020. Where we end up though, is a question mark. 60 years old is less than two years away. That's huge!

As a note, my Buy the Vikings screenplay is complete and I've started my next script, When the Chips are Down. Now I just need someone in the industry to give BTV a look see.

Let's get to a summary of recent life: 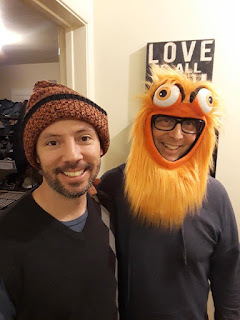 Gritty has surpassed the Phillie Phanatic as my all time favorite mascot. This gritty head gear has to be one of the greatest gifts I have EVER received.

Hot town, summer in the city
Back of my neck getting dirty and gritty
Been down, isn't it a pity
Doesn't seem to be a shadow in the city 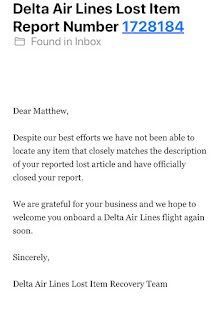 My lost kindle never showed up, but it seems like Delta tried their darndest. I recently flew up to Oakland and I spotted a lost phone on a chair inside the Southwest terminal at LAX. "What to do, what to do" I thought to myself. The lost device inserted me right back into the exciting lost kindle experience. I reported the lost phone to TSA. 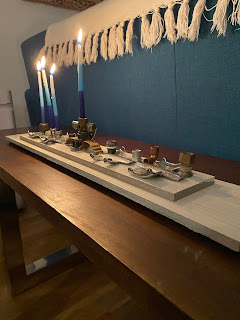 I
I made my own menorah for Hanukkah, using spare parts. Next up, a repurposed reading lamp. 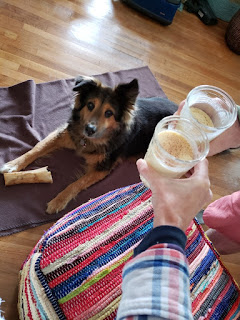 Typically I'm a Baileys consumer in the month of December, but that took a back seat to eggnog in 2019. 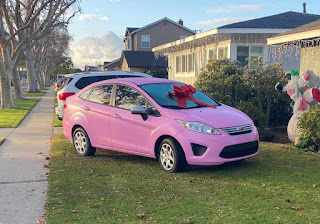 I got much enjoyment out of the Christmas gift my neighbors gave their daughter.

Some other notables:
I shaved my beard off in early December, but it's being brought back for 2020. Beast Mode made an NFL comeback. The Vikings season put me on a roller coaster...they had a big victory in the playoffs, but crapped out in the second round...reminding me why I have a love/hate relationship with Kirk Cousins.  Gracie's hearing is going and she's getting old, making me sad.  But she bounces around and gets under feet like a puppy.

I live to fight another day, another year, another decade. That's a good thing. Take a hike 2019.


at January 17, 2020
Email ThisBlogThis!Share to TwitterShare to FacebookShare to Pinterest