And the Beat Goes On, Infusion Day

As a kid, I would get a mail order catalog of gag and joke items. Whoopee cushions. Fake blood. Trick cards. My most coveted item, that I eventually ordered, was a fake cast. I never broke a bone as a kid. I was a big boned kid indeed. Stitches, yes. Nail into the foot and infecting a bone, yes. Running face first into my neighbor and getting a black eye, yes. For the infected foot I wore a cast to immobilize the foot. But no broken bones and while I didn't necessarily want to break anything, I did think the cast might get me extra attention. People signing my cast, bringing me candy and so on.

The other day, I had a follow up appointment with the back doctor. I've lost count but I think it's been about three months since problems started. I've been doing physical therapy and I have a 40 minute morning stretch and exercise routine at home.  It's improving.  I'm finally taking longish walks again. But no gym, no weights, no sea lions. The other day I thought to myself: "self you're almost back to good again." But then I woke up the next day and it hurt like heck again. It was a different pain though.  No pain shooting down my left leg. That was a good change. But suddenly I would get a stabbing pain in the lower back when walking, causing my knees to buckle just a tiny bit.

I told the doctor and he wants me to get an epidural shoot. Basically numb it up. It's a temporary fix and actually not a fix at all but it might give me relief.  However, it sounded like the doc was thinking surgery is in my future. The rationale being that my L5 disc is trash and this lower back issue is probably going to be chronic and come and go moving forward. Well that sucks. The good news is that it's not myeloma related. Basically it's wear and tear. He mentioned two options: Laminectomy or fusion. Well this certainly did shake me up. He said there's about a 50% success rate with fusion and this is actually a way better percentage than for option one. Dr Phan, who I saw yesterday and I literally trust with my life, said don't do it. That it rarely works. He says stretch and do yoga. And enjoy life.

The past couple of days, though, the back has felt good, I'm wondering if I'll even do a shot. Maybe I've crossed the threshold of recovery progress. Yesterday was my monthly Darzalex infusion and with it I get a drip of 12 mg of dex, a steroid that minimizes inflammation. So right now, the back feels particularly good. It also explains why I only slept two hours last night. I came home from the doctor's yesterday and really wanted to be left alone. Recall that dex can really make a person irritable. I yelled at two cars driving home, then at home I snapped at Leslie, Gracie and generally was pissed off all afternoon. And in two days, I'll be an emotional mess.  It's like clockwork and I'm pretty damn tired of it.  Over this weekend, I'll take another 16 mg of medrol, an oral steroid.

The uncertainty about the back is a kind of microcosm of myeloma. Such an unknown and mystery, and frustrating. I like definitive answers.  How long will my treatment continue to work? Do I have two more years to live or twenty more years. When do I become truly physically impacted by the wear and tear and toxicity of my regimen?  I'm a Libra and have been a challenged decision maker my whole life. Malcolm Gladwell had a great Podcast episode about how we can't really know if we're making a good decision because we have no way of knowing how the unchosen option would have turned out. He says don't bother worrying about it after we've make a decision. I've been a huge Malcolm Gladwell fan for nearly twenty years now. Tipping Point and Blink were hugely influential books for me. But recently he wrote an article rationalizing the non-action of the late Joe Paterno, coach of Penn State football, when he learned that an assistant coach was abusing young boys in the team facilities. People have been blasting Gladwell.

A few years back I started getting rid of stuff. I didn't expect to make it to 8 years. And now 8 and a half years into myeloma, I'm fairly confident that I'll be kicking myeloma's ass for many more years. So now I wish I hadn't got rid of some things. Occasionally I'll look for something and then remember that I sold it on ebay or gave it to someone carefully chosen by me. A Minnesota North Stars patch that I wanted to put on a hat. A Minnesota Vikings memento. Tiki drinking glasses. A book of the works of Shag, a very cool artist. So do I recreate or repurchase these things? Or do I continue to make myself into a minimalist.

And how about going forward?  Do I buy a sprinter van and travel the country? Or do I accept that I'm getting older and recognize that I ought to be more of a realist and less of a dreamer.  Before diagnosis, I had the totally incorrect impression of cancer. I thought you were either cured or died, either within a couple of years. I didn't realize that it can go on and on. I am participating in a study with some non-myeloma cancer patients, some who are in remission or cured.  Yet they have some of the same emotional challenges as me. And some have physical challenges many years post treatment.  Nonetheless it feels like there are unique mental mazes with myeloma and never ending treatment. At infusion today, I was the first one there and got my lucky chair. My buddy Mike showed up second and sat next to me. He was diagnosed around the same time as me and has been on Darzalex a month longer than I have. We chat with a newish patient today who was recently diagnosed with myeloma.  She was so happy to meet us and see that we were both thriving after so many years. Mike is 15 or 20 years older than me.  I go home from treatment and take an powerful nap. He goes to the gym. He's a beast and an inspiration.

The majority of time, I'm good at appreciating life and loving the little things. Generally I'm in good shape. Generally I'm positive, with some anger sprinkled in. Part of me wants to pack up the van, travel the country, see everyone I know until I get sick and then find a hidden spot somewhere near the Mississippi River in Minnesota and pull a Marley. But that's not really how this disease works. Another part of me, wants a house with a man cave and a swimming pool to entertain friends and family. But is that really me?  Maybe it needs to be me. Or maybe it doesn't. Gracie is getting older. She's healthy but her hearing is going, her back legs are achy and she's tired a lot. Leslie and I don't have kids. Gracie is pretty much my baby. I want Gracie riding in the van with me. Lately I cherish alone time. But Gracie is given free reign to invade my space any time.

Recently, I visited with a great friend who I don't see that often.  From that get together, I was motivated to start running again. But I haven't even had a chance for a short jog.  Days after seeing my friend, my back was keeping me horizontal. Running now seems unlikely. This is frustrating and adds to the mental tiredness. I can walk yes.  But when can I go the gym again? I'm starting a Livestrong program at a nearby YMCA which helps cancer patient regain fitness. I never thought I'd need something like this. I was always a self starter and self motivator when it came to fitness.  Unfortunately, the combo of minimal exercise and steroids are turning me into goo.  As a big boned child, I'm pretty sensitive and impacted by body image issues. Age, cancer, the occasional beer and back problems have exasperated my angst.  Should I accept the goo as well? What is ok to accept and what isn't?  Perhaps I am just growing up and faced with typical adult decisions.

Two weeks ago I was in Dallas meeting with other blood cancer patients.  It fired me up to be a good advocate, good person, engaged person and continue to explore new experiences and learn new things. I've been having self talks to give myself a boost and pat on the back. "you're ok" "you're great" "you can do it" "you're not so bad"

And now, I've forgotten why I was motivated to write this post. I had a real strong positive point to make. Something about that I'm doing well and the best is ahead for me.  I am working on a winning plan of attack. I am writing screenplay number two. I completed number one a few months back. It's an idea that had been floating in my head for decades...yes decades. Only one person has read it to date. But I need to start sharing it, cleaning it up and I need a connection. Unbiasedly I think it'd be a great movie. I've got some multi-media sculptures in mind that I'd like to start doing. I'm taking an on line history course via Coursera. I don't need credits or grades so it's gratis, free. I'm focused on mind and body. Left side and right side of the brain. I am building my core to hold my back in place. I'm going to get back on my bike. Embrace my family and other loved ones. Cheer the Vikings to a Super Bowl win. Note that Kirk Cousins might not be the quarterback to lead this team. But then again, maybe he is. Two weeks ago, I hated him with every fiber of my body. But he has partly redeemed himself of late. Let's see if he keeps it going. And the same goes with me, let's see if I keep it going.

I still really don't like this uncertainty. But I'm working on having on a what the heck and it doesn't matter attitude. Fingers crossed.

I turned 58 recently, so I'll close with pictures of two 58s. 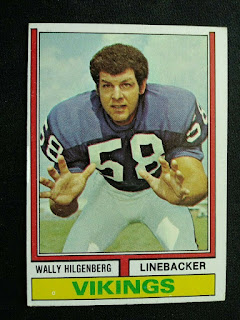 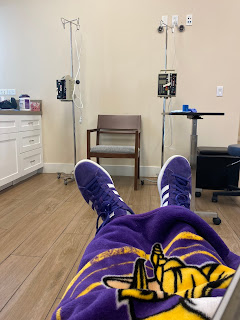 Me.Today. Purple Friday
at October 19, 2019
Email ThisBlogThis!Share to TwitterShare to FacebookShare to Pinterest