5 Days in Myeloma - A Summary

As you recall, last month I had a slight scare when Dr Phan thought perhaps we were seeing changes in my numbers and that we might be nearing the time to change treatment. I followed up the Phan visit with a Berenson visit. Berenson was not bothered in the least but what he saw. Ahhh, the mysteries and confusion of myeloma.

Monday of this week I met with Phan to review July labs. This time I had seen my results beforehand and knew they were back to where they've basically been since starting Darzalex in late 2016. Creatinine back to low 2's. Note that I put myself back onto a modified kidney diet. I had been eating everything lately. Foods high in phosphorus and potassium are kidney no no's. So I've cut back on nuts, beans, stuff like that.  Phan was pleased with the results and wrote off June labs as an anomoly.

Tuesday I did my volunteer duty at the Marine Mammal Rescue Center nearby. It's awesome and it's hard work and it's a break from thinking about about cancer. I feed harbor seals, sea lions and elephant seals. I also clean up poop, clean pens, wash dishes, do laundry. And I love it. Fellow volunteers are much younger than me, but they're a great bunch of animal loving people.

I have been tired as heck lately. I take massive 2 hours naps and when I wake it takes me an hour to even be able to function. Frustrating. So when Phan said it might be time to change, I equated tiredness with myeloma strengthening. But with my myeloma under control, the fatigue might be something else. I went to my primary care doctor and she is going to check my thyroid and vitamin b to see if that has something to do with it. We also discussed that perhaps it is partly in my head, that I might have some minor depression. Well I suggested it. She thought it might explain some of the fatigue, but that something physical is also likely. I outgrew my most recent therapist so she suggested someone new.  Primary care doctor was Wednesday.

Thursday was my quarterly visit with my dermatologist. Full body check (humility gets checked at the door). The good news is everything looks good. No warts, thank god! I am getting some precancerous spots on my head, so she froze a few spots and has me doing a topical cream for the next 8 days, which will make me look like I was beat up. Also Thursday I saw an orthopedist to talk about my elbow and arm. Starting a week ago, I had serious pain in the arm, was bruised and developed a bump just below the elbow. Phan guessed bursitis. But he acknowledged that it was outside his expertise. Leslie sent Phan a picture of the bruise as it worsened (see below) and he said get to a orthopedist. My dermatologist noticed it and thought it was just a benign cyst. The ortho thinks is it something called a redundant bursa and often is caused by trauma. But other than my normal little bumps and dings, I haven't had any trauma on the arm. It likely will go away in a month. But given my health history, we'll do an mri next week to ensure it's not a mass of something. The bruising and tenderness are almost gone. And the bump has shrunk.

And that brings us to Friday (as I write, earlier today). Today was my monthly darzalex infusion. 5 hours and ten minutes. Not so bad. My buddy Mike sits next to me, but there's not a lot chatting. We both basically nap and watch stuff on our laptops.

And that's my week.

Vikings training camp opened this well.  Coincidence that camp opened the same week that doctor's appointments kick my ass? I think not. 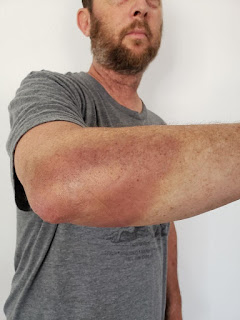 Oh I should also add that last week I had an awesome with my brother. We sort of recreated a shot with our uncle, 30 years later. 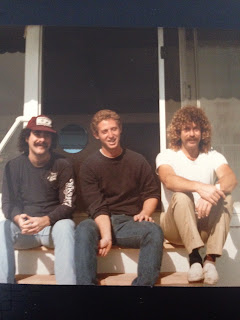 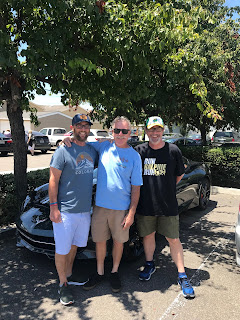 at July 27, 2019
Email ThisBlogThis!Share to TwitterShare to FacebookShare to Pinterest