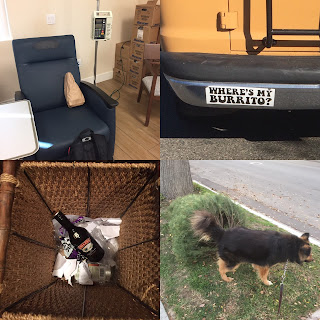 Apropos of nothing, here's the first update of 2019, in three parts:

Another season ends in frustration. By now it's expected but it's still disappointed to hear the kerplunk of the beginning of the season hopes going into the toilet. And to put this season in perspective, here is my Top 5 of disappointing Vikings seasons:

1998  They were 15-1 and set all kinds of scoring record. They were cruising to the super bowl and instead a kicker who hadn't missed all season, missed when it counted most. I watched this game with my family at a friend of the family's home...Minnesota natives. We were so ready to celebrate Minnesota style. Nope.

1975  This is when my hatred of the Dallas Cowboys took root. A no call on a clear offensive pass interference helped Roger Staubach, Drew Pearson and the rest of the despicables eliminated the Vikings from the playoffs.   This was one of the best Vikings teams ever. I was 14 years old and had watched the game from my aunt's house sitting in her restored barber chair.

2009  We all should have known the Brett Favre experiment would end in failure. He got our hopes up with an amazing season.  At the very end of a game that would have sent the Vikings to the Super Bowl for the first time in over 30 years, all he had to do was fall down and the Vikings would win.  Simple. I can fall down with zero thought. Instead he throws an interception and that was that. Poof.

1987  A strike season. The Vikings were one the best teams that season. Against Washington in the playoffs the Vikings were driving to win the game. An easy catch for a touchdown was dropped by Darren Nelson. Argh!!  Nelson was part of a massively one sided trade with the Cowboys for Herschel Walker, once one of my favorite players. The trade was basically 12 players for one; Walker. The Cowboys went on to be a mini dynasty and the Vikings went nowhere.  Nelson eventually returned to the Vikings from the Cowboys and added zilch.

2018  In 2017 the Vikings were one game from the super bowl, meaning excitement for the 2018 version had folks super excited. In 2017 all the pieces were just about there. To add to the championship pedigree of the team, the Viking added a high priced and over hyped quarterback, Kirk Cousins. Supposedly he was the final piece of the puzzle. Two weeks ago, all the Vikings had to do was win one game to get in the playoffs; in their home stadium and against a Bears team that had already clinched a playoff sport.  And did the Vikings rise to the occasion? Nope.

And there you have it. As a reminder., the very first Vikings game in 1961 was 3 weeks before I was born. At the time, the parallel roller coasters for both me and the team was not known, but has become quite clear over both of our 57 years of life. 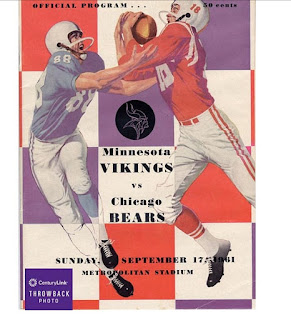 Act III Spirit in the Air

Going way back, sometime in 1989, I was wrapping on my degree at UCLA and had started working at the Port of Los Angeles as an intern. I had a decent sized studio apartment and was living the life. One night on the wall over my bed I was wakened by a scrolling hazy roll of frightening faces that continued for several minutes. I assumed it was caused by light from the outside, but I couldn't find any source. The faces just kept going and going for several minutes.

In 2005 I created a 45 by 45 list. It wasn't a bucket list per se, but was a list of 45 things I wanted to accomplish between my 44th and 45th birthday.  One goal was to sit down with a rabbi for the very first time in my life to discuss the meaning of life.  I met with a recommended rabbi and he told me that the meaning of life was to explore the meaning of life. This really struck a chord with me and even drives me now I face my own mortality.  Many years later this philosophy was echoed by a friend of Leslie's who said that life is basically art..subject to interpretation and to be appreciated.

In 2011, I started feeling not right about 3 months before I was diagnosed with myeloma. Fatigue, fevers, and night sweats were worsening exponentially every day. My primary care doctor was testing me for all kinds of stuff. But he never ever considered cancer.  In my gut I knew something was wrong, but I also how right I'd turn out to me. Two weeks before my diagnosis, I went to Las Vegas for a friend's birthday. I had considered not going given I just hadn't been feeling well. But I figured I'd rally once there. Within 3 hours of arriving in Vegas, I was hit by the worst yet combination of chills, cold sweats and then a fever that was burning me up.  I told my friends I was going to bed (at 4 in the afternoon). In the elevator going to my room, the gravity of my potential situation started to hit me.  The next morning, I was feeling better but planned to go home early to get back into the doctor's office. I rendezvoused  with my friend John for breakfast at the Mirage Hotel before leaving town. John knew something was up based on what he saw from me the night before. Up until then I hadn't mentioned to him nor anyone else anyone about my recent ills.  Walking through the casino to meet John, I was absolutely blasted by an overwhelming feeling that I  would be dying very soon.  This feeling was staggering and as clear as day.

Shortly after being diagnosed, I began having a recurring dream every night where I was driving somewhere in my old VW bug with my stepdad Ed as passenger. Ed had passed away several years earlier. In my dream (s) it was always raining and always dark. I'd be driving down a muddy and pitch black road and relying on Ed to direct me. Instead of Ed helping me get to my destination, he'd keep sending me off in the wrong direction. His purpose was clearly to prevent me from heading down the wet dark road.  In the same time period, when I'd close my eyes I'd see those same ghost-like faces from way back scrolling on the inside of eye lids. They'd be in the periphery of my closed eyes.  This lasted for several weeks. Eventually the dreams with Ed and ghost faces went away. The dark muddy road became calming palm trees on a small empty island.  I'd watch the trees sway in the wind whenever I'd close my eyes to take a nap. It was serene and calming.

In March of  2018. I had the flu.  For myeloma patients, a flu or minor illness can turn into something bad, very bad.  One night while battling this flu, I had a dream that I was already dead. In my dream I had died years earlier and was now stuck in purgatory (not a typical place for a a non practicing Jew), until I made peace with myself and apologized to people that had once been in my life. I woke up from the dream positive of it's truth. I woke Leslie to tell her and she said that no, I was still much alive and just dreaming.  I told Dr Phan once the flu had passed and he said I might be have been sepsis and hallucinating and probably should have been in the hostipal.  I dismissed Leslie's and Dr Phan's thoughts and continued tho think I was already dead.  Today I am mostly confident that I am still alive.  But I am also still certain of my need to come to a balance with my life if I wanted to have true piece of mind.

In early December,  I went to a myeloma support group meeting to hear a friend speak. I only attend support groups on as-needed basis.  After the meeting I was walking through the parking structure, alone, to my car. It was about 9 at night.  At one point, I sensed someone was walking directly behind me. I turned around to say what the fuck. But no one was there. I continued to walk towards my car and then saw a shadow next to my shadow from the overhead lights and again sensed someone walking behind me. I turned around again and no one was there. Shortly after driving home with the experience still running through my brain, I received a text from a friend's wife letting me know that her husband had passed away earlier that evening.  He had been diagnosed with cancer about a year earlier (not myeloma) and it had metastasized through out his body.  We'd occasionally chat on the phone and he'd always say how he was confident that we were both going to survive and how we'd take our show on the road to let people know about the miracle of our survival and the power of belief.

Yes, it's a running set of individually coincidental occurrences. Taken as a whole, I am left wondering about the meaning of life.  I doubt I'll jump  into believing in something that I never have before, but I am quite aware of a perhaps non-random world around me.
at January 04, 2019
Email ThisBlogThis!Share to TwitterShare to FacebookShare to Pinterest