It goes without saying that I'm a bit of a Minnesota Vikings fan. It's been this way for my lifetime.  Nonetheless, I'm not even going to bother getting excited for them this season and for as long as Kirk Cousins is the quarterback. How I miss Joe Kapp, Fran Tarkenton, Randall Cunningham, Daunte Culpper, Teddy Bridgewater and Case Keenum.  I don't miss Bret Favre. What is less known is that in the 1970s and into the 1980s, the Philadelphia Phillies baseball team was my number two team. I can still name their starting lineup from those years without even taxing my memory bank. Dick Allen, Dave Cash, Larry Bowa, Mike Schmidt, Garry Maddox Bake McBride, Greg Luzinski, Bob Boone, with Steve Carlton and Tug McGraw being the pitching stars. Greg Luzinki, aka the Bull, was my absolute favorite. He had power, hit for average and had some deceptive speed for his size. He played right field and had a unique side way stance to help him get a jump on fly balls to rights. And he had Luzinski calves, always a goal of mine that gets farther and farther away. 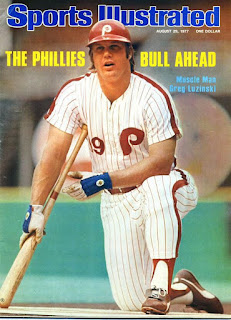 The Phillies since those halycon days have had the Phillie Phanatic as their  mascot.  The Phanatic is one of the all-time greats.  I learned this week from a Philadelphia native, that the Phanatic has had the same person in the costume since being introduced. 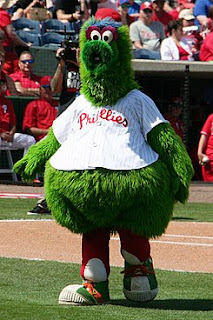 Earlier this year, the Philadelphia Flyers, a hockey team, introduced their new mascot: Gritty. Gritty's initial introduction was inauspicious to say the least.  As a side note, Gritty and the Phantic have made appearances together. 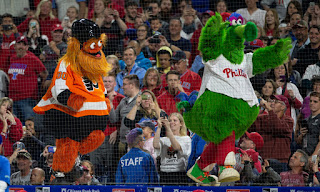 Gritty's intro made him/her much beloved and the love has grown exponentially since then. Gritty has become a cultural icon. References to Gritty have been during late night talk shows, Saturday Night Live, and Gritty has even been adopted as the symbol of the left. 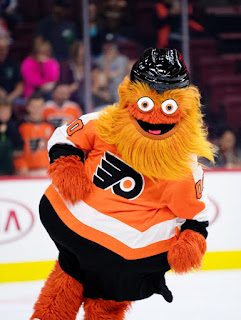 This is a pretty interesting read if you have a moment. How the Left Won the War for Gritty. This article was in the New Yorker.  My friend John and I have been in the Gritty fan club since the get go.  Gritty, by no means, intended to become the left's hero or a cultural phenomenon.  But there it is and Gritty has embraced this role.

You ask where I am going with this. Sit tight and it will all make sense.  When I was diagnosed, I was angry and depressed.  I didn't want to talk to anyone, so I started my blog as a way to keep family and friends up to date, a particular necessity during the first harrowing 10 months, when were struggling to find a chemo drug that works.  Seven and half years later, the blog carries on, despite my occasional desire to shut it down. This blog has introduced me to many fellow patients, all inspiring and all fighters in their own right.  I've made great friends during this journey. I also have been connected to several cancer and myeloma organizations and participate in a host of events aimed at helping other myeloma patients.  When I quit work last year, I recognized the need to focus my time and energy on my health.  My quality of life really sucked at that point. I also wanted to have more time and energy to volunteer more and to spend time doing whatever the hell I wanted, given I have this myeloma black cloud trailing me 24/7.  Ask any myeloma patient about the emotional challenge of having an incurable cancer hanging over you.  You'd get some common themes by asking this question.

I suppose this all makes me an advocate, although I'm not sure about this. Last month I was a participant in an on-line panel discussion with a few other folks to talk about our role as advocates.  There's a number of smart and motivated advocates who know a whole lot about this disease. I felt out of place and hung up the phone wondering what the hell I am doing.

In the past couple of months, I've been really wondering what else I am, besides being a cancer patient and possible advocate.  Cancer has become my identity. And I honestly gotta say I am pretty darn sick of it.  It's an understatement to say it's a life changer. Sure it's made me a better person.  I know what's important in my life.  But I need to do more and be more than just a cancer patient.  Recently it hit me that I need to start saying no to invite that come across my digital desk (emails).  I'll say yes to the ones that are important, but for the ones where I don't quite see value, I'm out. It gets overwhelming,  It's serious stuff.  I'm starting to know of far too many friends who succumb to myeloma or other cancers.  Basically I keep myself in denial on my eventual fate. Although right now, denial has taken a back seat to this sucks.

Seven and half years is getting to be a while with this disease.  There's not many things in my life where I've been committed for longer than a couple of years. 7 and a half years is a long ass time for me.  Fortunately I've made amazing and inspirational friends, linked by our glaring commonality and this keeps me going.  I would if I could, but I can't just throw my hands up and say I quit myeloma.

This role as non-quitter and a stick to itness is new to me. And truthfully it just kind of fell into my lap.  I didn't put in decades of blood sweat and tear to make my dream come true. It's all very accidental.

I could spend hours talking about all the occurrences in my sphere that make me question the accidental nature of my circumstance. I'll save for another time and  a different post. In the meantime, I continue.

Yesterday, last night and earlier today I've chatted with myself about needing to work much harder on something other than cancer.  I talk to myself about being in beast mode, but I gotta take an extra step to get there.

In absolutely no way am I in the Gritty cultural phenomenon universe. But like Gritty, this position I am in wasn't planned. We both put on skates and fell.  I have to listen to clues from the universe and I'll continue to share my experience and I'll continue to embrace the gusto of life. But I also must continue searching for some significance of everything.  Around my 45th birthday (a lifetime ago), I spoke with a Rabbi who told me that the meaning of life is to figure out the meaning of life.  This resonated with me then and continues to be my mantra today.

I will be saying no to some opportunities.  I'm sure Gritty and Gritty's people have to turn down a lot of appearances.  We'll still see Gritty out there, but in his/her soul, Gritty is supporting the Flyers. Gritty will keep on doing Gritty. I'll keep on doing me.

at December 07, 2018
Email ThisBlogThis!Share to TwitterShare to FacebookShare to Pinterest