Max to the 3rd Power

This is infusion week. It means I did my labs last week and I see Dr Phan today before I can do my darzalex infusion on Friday. I also like to see Berenson the week of infusion. Berenson isn't a requirement but it gives me a level of comfort (and he actually is the architect of all my successful regimens). I see my lab results before I see him so I basically know what he'll say. But it's kind of like a thunder blanket for me. It's calming seeing him. He does take research blood on my visits, so there is value to me going there. I've pondered doing my infusion at his office, but it's a pain in the ass to get to his office and I do love Dr Phan. I can rely on Phan to spend time with me when I have questions. I don't want to give that up.  Also of significance, Berenson's office is at Sunset and Doheny, which is only a mile or so from where I grew up (Wetherly and Gregory Way)  and my favorite bakery (Pico and Doheny). He is also within 2 miles of my favorite deli (Canters on Fairfax) and favorite sports bar (Barney's Beanery (the original) on Santa Monica Blvd near La Cienega). So when I go see Dr B, I try to fit in some combination of these places. 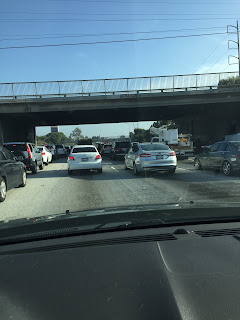 It's about 30 miles door to door from my house to Berenson's office. Depending on traffic it can take anywhere from an hour to 2 hours to make that drive (up the 405 freeway).  Lately I've been leaving my house super early, so I don't have to stress about the traffic and I can get a pre-visit breakfast at Canters or somewhere else. Today I went to an alternative deli, Nate n Al's.  Growing up, across the street from us, lived the son of either Nate or Al. Maybe Al. My sister babysat the young boys and would take them to the deli as part of her babysitting duties. Not a bad gig. The sons eventually took over the deli. It's not as good as Canters, but it's closer to Berenson's office and despite leaving my house at 6:50 today, I was pressed for time so as not to be late for the appointment, I passed Canters. Al's son represented me in the childhood foot injury that may or may not have led to my myeloma (see previous post). 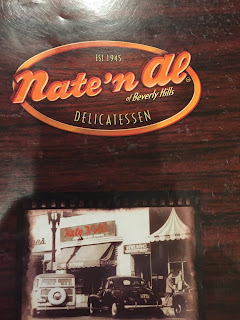 Berenson always has a scribe with him for his examines. Typically it's a younger person who is preparing to go to medical school. For the past 3 years, scribe duties have been covered by two brothers in succession, each of whom is now in medical school. Today he had a new person taking notes. He introduced himself as Max. I said that was my grandfather's name. He asked if it was short for Maxwell or Maximilian. I've never been asked that, I've never asked and I had no idea. Good question though. The scribe is Maximilian, which might be one of the coolest names I've ever heard. I'd make people call me Maximilian if that was name. Berenson noted that his grandfather was also named Max.

My mom adopted a dog many years ago. His name was Dillon when she got him. Same name as one of her grandkids (and of course my nephew) so she changed his name to Max (the dog, not her grandson). Max passed away last year and is really missed. He was a good boy. And for good measure, in college I had a friend named Rachel, but she went by Max. I'm not sure why. Max's mom was a teacher and taught Janet Evans in elementary school. Janet Evans, was a very successful Olympic swimmer and who (it almost goes without saying) is my favorite Olympian of all time. Tied for number two on my favorite Olympian list is Cathy Freeman, a 400 meter sprinter from Australia who is an advocate for aboriginal youth in her country, and Edwin Moses, who dominated the 400 meters hurdles for perhaps 15 years. He was tall and lean, wore glasses, and absolutely smoked everybody on the track. Note that Houston McTear could have been my favorite Olympian if only he had achieved Olympic success. He dominated the 100 yard and 100 meter sprints in the late 1970s and into the early 80s. He was world class at 17 years old. I think injuries and bad luck hindered his career. We are the same age and I remember in high school reading about him.

With regard to my health, my myeloma is doing great. Lights chains are next to nothing. My creatinin is 2.44, which is way out of failure range. I mentioned my foot issue to Berenson and he said that some folks are getting foot fractures if they are taking Xgeva, a monthly bone strengthening shot for myeloma patients who are kidney impacted. I take a relative of Xgeva called Prolia. I get a shot only every six months. He said fractures aren't common with Prolia. X rays at the foot doctor didn't show any fractures, instead they showed just a couple of small pesky spurs. Follow up at the foot doctor is next week and I imagine we'll make a shoe insert that will take pressure off the tender spot on my foot pad where the spurs are.  My neck is a tiny bit sore and Berenson recommends x rays. He thinks, as do I, that it's arthritis resulting from all the steroids I take. When I see Phan later today, I'll run it by him.

I woke up today with a nasty looking hematoma in my left eye. I have no idea where that came from. Berenson says it is nothing and should go away in a couple of weeks. I'll also mention this to Phan. I pondered having the eye doctor look at it. Leslie prefers this but I'm kind of doctored out this week, so I'll give it time to heal. Generally I bruise and bleed super easily. My body is one giant bruise, so it makes sense that my eye might be impacted as well. 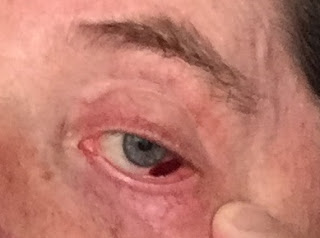 I closed out the Berenson visit with a black and white cookie from the Beverlywood Bakery.

Perhaps next doctor visit I'll get to Barneys.

Oh and one last thing, I just finished the book The Bright Hour, about a woman's journey with terminal cancer. Excellent reading and if someone wants it, I'll send it to you. First person to chime in gets it. 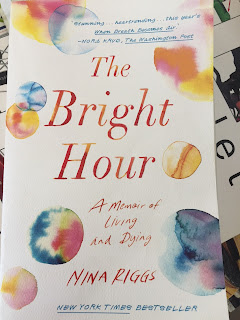 at July 11, 2018
Email ThisBlogThis!Share to TwitterShare to FacebookShare to Pinterest