New year, new me. Or is it new year, old me? It's been five months since I stopped working. As I have said before, it's done wonders for my physical well being. I feel as good as I've felt since being diagnosed nearly 7 years ago. Of course, Darzalex and Pomalyst have something to do with this. But also being able to rest and enjoy life has been important to how I feel. Mentally, I am getting there. I'm still trying to figure out what next. I have time to think about how I got from May 2011 to today.

I've used this holiday season to connect and reconnect with friends. It's been nice. It also highlights how much myeloma has changed my life.  Can I recapture some of my pre-cancer life? Maybe. Can I balance new and old? Perhaps.

That first year of myeloma there was a lot of in and out of the hospital. This was 2011. Summer of 2011 was also a lock out period for the NFL. The NFL owners wanted some concessions from the players. I'd be laying in my hospital bed watching ESPN on the crappy hospital television, hoping that there wouldn't be lost season. One thought that went through my mind was that I might not live to see the Vikings ever win a super bowl.  That would suck. I've seen t shirts since then that say "Please win one before I die". The NFL season happened without a hitch.  Several years later the Vikings still haven't won a super bowl.

I've spent time on my myeloma page explaining how I've come to be Vikings obsessed.  Before this season I vowed to try and temper my fandom. Even going so far as to not renew my NFL Sunday Ticket that allowed me to watch every Viking game, every week. This season I haven't watched every game. But this season the Vikings are looking pretty good and are being mentioned as super bowl contenders .  The regular season ended yesterday and I'd say at this point my excitement is peaking.

Given how in my mind I've drawn similarities with my life and my fortunes and near misses with the fate and history of the Vikings, I wonder what it would mean if they actually won a super bowl this year. Does this mean I can die happy? Does this mean my history is changing and I'll experience new heights and success? It's hard to say. And it's hard to explain. It might not make sense to anyone at all.  In fact writing this, makes me think that I'm being pretty ridiculous. I explained to Leslie how excited I am for the Vikings run this year. She said go with it.

I had a couple of beers and some calamari with my friend Matt the other day. He's not a sports fan at all and thinks it is all pretty silly. But when I explained to him, that every year for probably 20 years I place a $100 pre-season bet on the Vikings to win the super bowl. And that if they win this year I stand to gain $2,500 and he'd go with me to Vegas to collect, he gets a little excited. Different motivation for different folks. Same results though.

I'm 56 years old. For my 45th birthday I grew a beard as a component of my 45 by 45 list. Since then I've had the beard for probably 85% of the time. The last couple of times I've shaved it off, I've hated my face. It's been puffy from the steroids. I'd gotten fat. So I'd grow the beard back to cover up the puff. Lately though the beard has really made me look old. I've been losing weight and we've cut my steroid dose. So yesterday, New Years Eve, I shaved the beard off. Leslie warned me that each time I do it, I get upset by my puffiness. But this time it's not too bad.  So I may keep it off for a while. I still have another 10-15 pounds to lose.  Cutting carbs has been super helpful with my weight lose attempt.

Cutting the beard is also symbolic. It represents my attempt to get back to the old Matt. The Matt who enjoys life and has energy to enjoy life and friends and experiences. It's been quite a journey to get to this point. Still a work in process.

I'm working on my What Next list. Also still in progress. A couple of things I need to do, is look for a fund raiser/activity that gives me something to focus on and a reason to get in shape. I also need to do things that are non cancer related.

I have pondered before and am thinking about it again...shutting down Matt vs Myeloma.  I don't post much and other than this specific post, I'm not inclined to write about or share my myeloma journey. Approaching seven years since diagnosis is awesome. Better than hoped for back in 2011. But it also gets redundant. I've talked to patients who have had the disease for nearly 20 years and they still have the concerns and worries of living with a disease that could reactivate at any time. Seems like your head might explode with 20 years of that kind of stress.

I'm pretty darn fortunate (my friend Brad who died from myeloma a couple of years ago, refused to say lucky, he always used the word fortunate. I've tried to adopt that philosophy) that I feel as good as I do. It gives me a sense of eases and comfort with the myeloma. Perhaps I am even lackadaisical (which isn't a bad thing).  Thus writing about it seems a bit pointless.  I started this blog as a way of keeping people up to date with my status. It's turned out to open me up to experiences and people I never would have known or had.   But where I go from here, I'm not sure.  We'll see.

For now, I leave you with the clean shaven face and Vikings beanie. 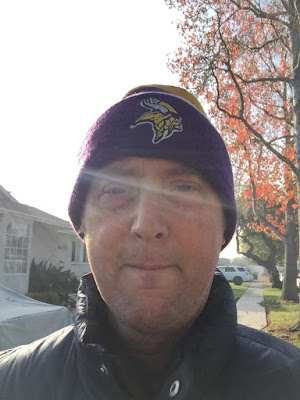 at January 01, 2018
Email ThisBlogThis!Share to TwitterShare to FacebookShare to Pinterest