David Bowie planned his end as he lived – on his own terms, blazing a trail

Below is article from The Guardian by Ann Neumann about how David Bowie and many others are now controlling their end of life decisions.


“A complete surprise,” said Brian Eno. “Shocked,” said Peter Gabriel. After more than 40 years of friendship and, in the case of Eno, regular email exchanges, the news of David Bowie’s death Sunday appeared staggering and unexpected to his friends. The rest of us were surprised and shocked too. Bowie had managed to hide his terminal cancer from almost everyone, even flashing a joyous smile for the release of his new album. 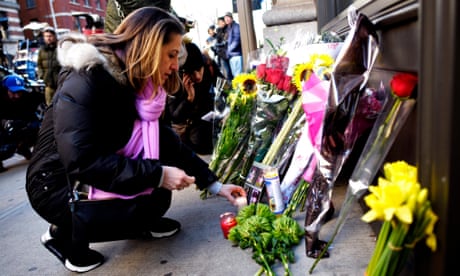 Exit Bowie, discreetly: 'He thought it honourable to become invisible'

The singer treasured his privacy in New York, with even friends and neighbours unaware of the cancer that killed him – ‘He didn’t want a circus,’ said one
Bowie may have been a profoundly unique musician, but his secrecy regarding his terminal condition is increasingly common. Death, particularly for those in Bowie’s generation, is becoming something to control – an event to arrange and manage. The effect can be heartbreaking for friends and fans who had no chance to say goodbye. But it’s also a way for the dying to avoid what they may consider the indignities of disease and the exhaustion of attention.
As the Baby Boomer generation continues to age and encounter infirmity and terminal disease, they will continue to demand greater control, refusing to follow doctors into painful treatments and life-extending measures. A good death to this demographic group does not come to the oldest, but to those who have lived well up to the very end.
The death of David Bowie was well choreographed, a produced roll-out of images and information. Blackstar, Bowie’s latest and last album, released on his 69th birthday, flew to the top of UK and US charts a few days before his death. Publicity photos, possibly taken then, show him standing, chic as ever, in a dark suit and jaunty hat, a metal roll-up door behind him, his head thrown back in an exuberant laugh. It was the laugh of vitality until, two days later, it was a laugh of defiance.
Baby boomers, those like Bowie between the ages of 51 and 70, who were born just after the second World War, have been a restless, relentless generation. Their protests in the 1960s and 70s were no more enthusiastic than their embrace of financial security in the 1980s. Boomers have reformed and reinforced every caprice of their age, so it’s no wonder that now, as they confront aging and the ends of their lives, they’re choosing quality of life over quantity. That means making time for bucket list adventures, foregoing those heroic “do everything” treatments and yes, planning every detail of their deaths.

In 2012, Hollywood gasped when the death of Nora Ephron, screenwriter of Silkwood, When Harry Met Sally and Sleepless in Seattle, was unexpectedly announced. Ephron had told no one. But she left clues in her final book, I Remember Nothing, that her days were numbered. Hiding terminal diagnoses is a way for patients to control their deaths.

“Boomers have never been a stoic bunch,” gerontologist Ken Dychtwald told Time magazine in 2013. “They’re not going to allow their last chapter in life to be an extended period of loss, fear, pain and suffering.”
Boomers’ efforts to change the way Americans die are already being felt. Not willing to linger for years in nursing homes, they’re pressing for the legalization of aid in dying, the legal right to receive a lethal dose of medication from their doctor when they have six months or less to live. The movement has garnered a groundswell of support in the past two decades, with four of the five states where it is legal passing their laws (or in the case of Montana, deciding their court cases) in the past six years. More than a dozen other states have grassroots initiatives underway, with six actively considering legislation.
Efforts to better plan end-of-life care decisions have garnered attention, too, in recent years, with a proliferation of resources for elders to organize their finances and their end-of-life decisions. Hospice use and home deaths are increasing. A number of bestselling books have recently brought planning options and elder care issues out into the open, including Atul Gawande’s Being Mortal and Katy Butler’s Knocking on Heaven’s Door, in which both chronicled the long and painful deaths of their fathers and addressed medicine’s vagaries.
Bowie had every right to protect the privacy of his final days, and if the reports are true that his terminal liver cancer began in his lungs (a common path for lung cancer), this was likely a second round. He long knew then what was coming; the five-year survival rate from liver cancer is about 16%. And it seems he wasted no time in orchestrating his final days. Like everything else Bowie made acceptable for his fans – fluid genders, flamboyant, outrageous clothes, dreams of equality and other worlds – this grand and surprising final exit may signal to the 76 million Baby Boomers now facing their own twilight that there’s no harm in going out your own way.

at January 13, 2016
Email ThisBlogThis!Share to TwitterShare to FacebookShare to Pinterest