Tomorrow is June 2, 49 months since my myeloma diagnosis.  I'm bringing things full circle. 49 was Ed Marinaro, who played for the Vikings from 1972 to 1975. He played in two Super Bowls for the Vikings. 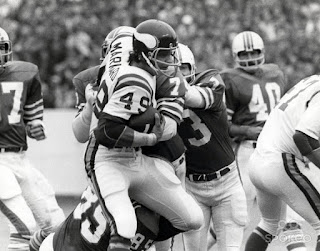 He played college football at Cornell and was runner up in the Heisman Trophy voting in 1971, a huge accomplishment for an Ivy League football player. He led the nation in rushing his junior and season seasons.He played 27 games for Cornell, 1969-1971, and averaged 174.6 rushing yards per game. Marinaro had 10 games in which he exceeded 200 yards; this includes, in 1969, 245 against Rutgers, 281 against Harvard; in 1970, 260 against Lehigh; in 1971, 272 against Columbia, 260 against Colgate. In 1971 his average was 209 a game, an NCAA record that lasted 10 years. That year he led the nation in scoring, rushing and all-purpose running. He was all- America twice and in 1971 won the Maxwell Trophy and was named Player of the Year by Columbus, Cleveland and Washington Touchdown Clubs. I'm gonna say it, he should have won the Heisman Trophy. 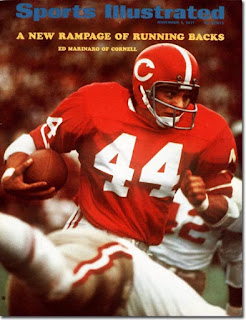 After finishing his career, Ed played the role of Officer Joe Coffey on Hill Street Blues for several years. 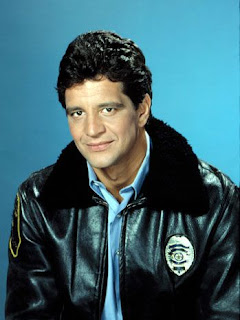 Why Ed Marinaro you ask? Full circle, you ask? Way back in the early 80s, I lived with my Uncle Jan and my best friend John in Santa Monica. I was just a young pup. Jan had a friend, Debbie, who became my friend.  I've written about Debbie before. She was the first person to talk to me about myeloma. She was diagnosed a couple of years before me. She told me everything would be ok. I hadn't talked to Debbie for many years when she contacted me back in May, 2011.  Debbie went to Cedars Sinai for her treatment. When her myeloma got tricky, her doctor sent her to Berenson. I'd see her at Dr. B once in a while.  After not seeing her for several weeks and leaving her a number of voice mails, my suspicions were raised.  Shortly thereafter, a friend at Dr. B's office confirmed my worries, that Debbie had passed away. Heartbreaking.

Anyhow, to lighten it up..Debbie had a friend, Lisa Frazier, who was several years older than me. Lisa worked for Charles Schwab, was blond, funny, and drove an old TR7. So cool.  Anyhow, Lisa and I dated for a short while. In her apartment she had a couple of pictures with two celebrities who she had dated. Tony Danza and Ed Marinaro.  As a truck driving 20 year old snot nosed punk, who was on a break from UCLA, these photos were a bit intimidating. This was one of those times in life when I truly felt I was out of my league.

Even though we stopped dating, we remained friends. I saw Lisa once after I went back to school. But that was it. Debbie told me she talked to Lisa once in a while.

So that's my 49th month.  Today I have a cold and I'm so fricking pissed about it.  Worked half day so I could come home, sleep and knock that shit out.  Tomorrow is the 15th day of the current chemo cycle. Last time I was sick, Phan made me delay chemo for two weeks. That was not ok with me. And if I have to miss tomorrow because I have a cold, I'll be seriously unhappy.

Other than that, all is good.
at June 01, 2015
Email ThisBlogThis!Share to TwitterShare to FacebookShare to Pinterest