What Can I Say?

Yesterday was day 4 of Treanda the Sequel.  After day 1 earlier in the week, I had to go to work and  I had horrible steroid rage. Probably the worst I've had the whole time I've been on treatment. Lots of apologies and warnings to coworkers.  Today, I'm hiding at home to avoid anything that might set off another round of anger.  The crash however wasn't so bad.  Recently I was prescribed a medicine called NuVigil, which acts as an upper and can counteract the tiredness and fogginess that accompanies the dex crash.  This week I had key presentation to make at work and was feeling pretty brain drain. Half a tablet and I was up, my brain was working and I dominated in my presentation.  Anyone else take the stuff? We asked Phan and Berenson about it. Phan was good with it, as was Berenson, who said he has a number of patients who take it to counter the dex.  Both said its non addictive.

Speaking of Berenson, He has his non-profit, The Institute of Myeloma and Bone Cancer Research, for which Team Goldman is raising money for.  Team Goldman is me, Leslie, my mom, my brother Seth, his wife Nancy, nephew Dillon and his wife Jacquie, niece Destiny and her husband Justin and their adorable baby boy Liam Matthew.  Also doing the race are Seth & Nancy's kids, Megan, Jared and Emma. The race is May 26, 3 weeks after my third cancerversary. May 2, 2011 was diagnosis day. To donate to Team Goldman and to help with continued research into finding a cure for Multiple Myeloma, here is the link: http://www.firstgiving.com/fundraiser/mattgoldman/teamgoldman

With regard to dates:
- April 2 is 35 months. Any suggestions for my number 35 representation? Think up!
- May 3, the day after my cancerversary, I'm leading a bike tour of the port as part of Long Beach's Annual Bike Fest. I haven't done a port bike tour in a few years, but they are real fun and gives folks a chance to see the industrial port by bike, a not common occurrence.

My buddy Brad recently posted about how he had normal night out with friends, as if his cancer didn't even exist. I also had this experience last week And it was awesome, not having cancer or myeloma on the mind. Just hanging out with friends, watching basketball, having a couple of beers. Myeloma gets to be a boring topic, but no escaping it ...well there are escapes. Guess we need to get our mindset into the normalcy mode.

Here is a picture of Gracie's fur, showing grey hair coming in. Do not like, it means she is getting older. 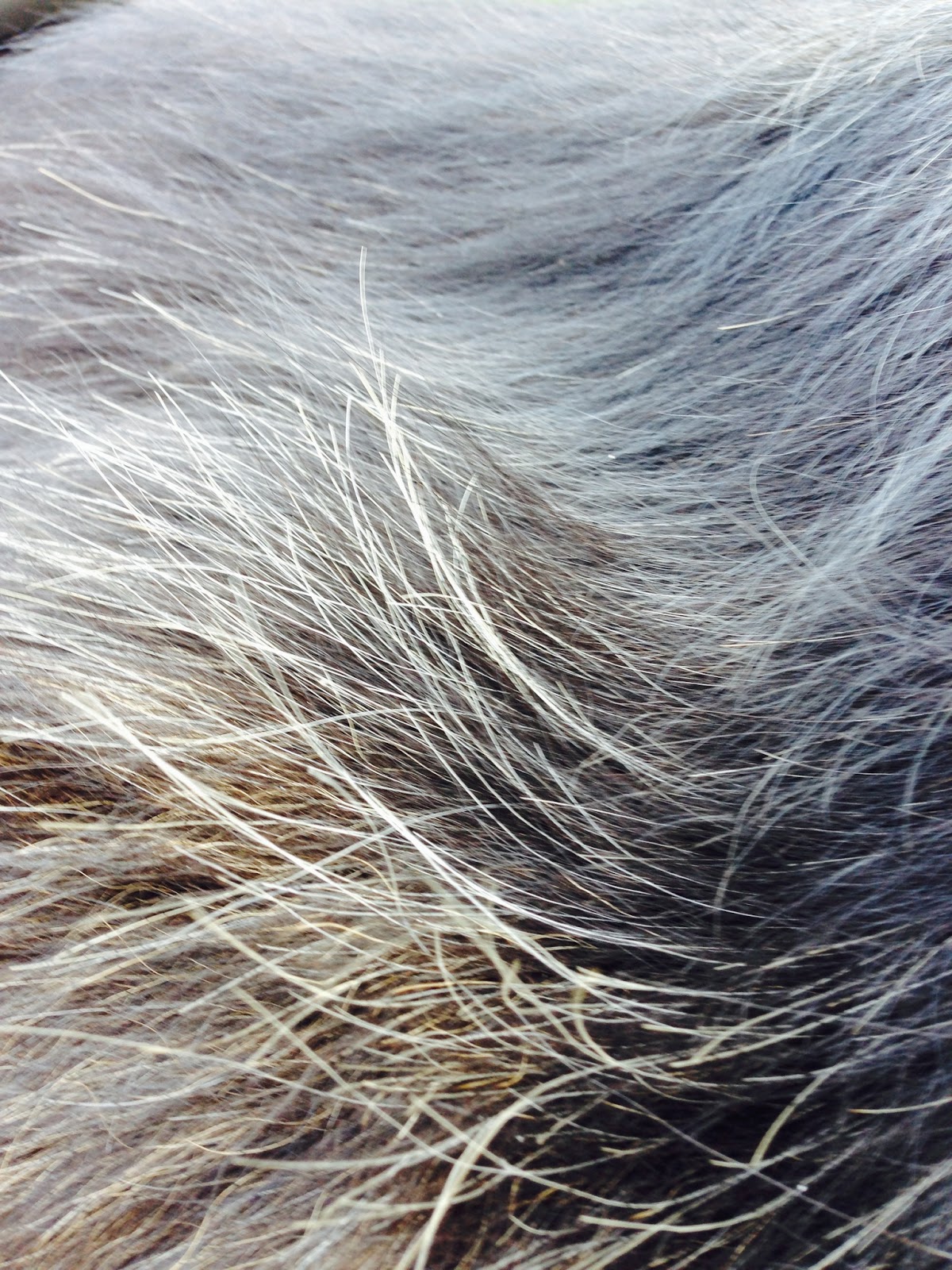 And here is an image that I see on facebook once in a while. Hate it. Passive aggressive, condescending, and perpetuates misperceptions about cancer patients. I want a new house, new car, new phone, to lose weight, and beat cancer.  Yes cancer sucks but survivors also want normalcy and to live life. Plus what's with the passive aggressive way of telling friends if they don't repost then perhaps they are not worthy of being friends.  Am I being too harsh? Thoughts? 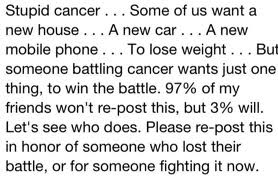 One last thing, as I was writing this, we had a little aftershock. Last night there was 5.1 earthquake centered in La Habra, perhaps 20 miles from Long Beach. It shook good, but no damage, no problems. Just a little reminder that earthquakes are lurking. ﻿
﻿
at March 29, 2014
Email ThisBlogThis!Share to TwitterShare to FacebookShare to Pinterest