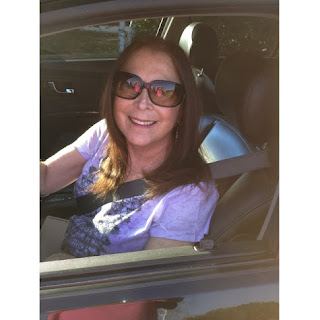 I might have told this story before. Many many years ago I transferred from San Diego State University to UCLA. I was only 19, but UCLA would be my 3rd college since graduating high school. First was UC San Diego. I lasted two weeks. Roommate issues. Then SDSU, where I lasted two semesters. Honestly it just wasn't challenging. Felt easier than high school. So I transferred to UCLA, where I flunked out of in my first quarter..completely for a lack of trying. I did go back several years later and earned my B.A. and M.A.

When I moved up to L.A. from San Diego, I moved in with my uncle and his roommate, John, who now lives in Tucson and has been  massively supportive of all I do, pre and post myeloma diagnosis. At 19, I began hanging out with folks perhaps 10 years older than me. That's a big age difference for a 19 year old. Through my uncle Jan and John, I developed a whole network of new friends.  Ray, who we visited in Maui over thanksgiving, is one of those.

Another person was Debbie. She was one of Jan's closest friends.  She was part of the group that we hung out with.  She introduced me to Lisa Frazier, several years older than me, but probably the first woman who left me flummoxed, frustrated and smitten with serious puppy love. Lisa drove an old Triumph comfortable, which only added to her mystique. Oh, she had also once dated Ed Marinaro (actor and former Viking running back/Heisman Trophy runner up) and Tony Danza. How I was even in the mix, to this day, remains an unsolved mystery.

Back to Debbie. We're talking about the early to mid 80s. Debbie was the nicest, sweetest, kindest person.  She was level headed.  She'd house sit a friend's house on the Malibu bluffs.  I remember going there one time with Jan and my brother.  The property had horses and I can still see Seth getting tossed by one of those horses. He didn't mention that he hadn't really been on a horse before. And we didn't know that the horses weren't used to being ridden. No damage done though.

Debbie was family. I'm not sure how Jan knew her. But because of their friendship, Debbie embraced me and in many ways watched out for me. Protected me from myself.

Life is funny. Years go by, tight friendships turn into very occasional acquaintances.  Flash forward to 2011. Jan remained friends with Debbie all those years, although they both had created separate lives and didn't see each other more than once or twice a year.  Me? When I was diagnosed in 2011, I hadn't seen or talked to Debbie since the mid 1980s. 25 years perhaps.

When diagnosed though, I was told by a common friend that Debbie had the same thing as me. Multiple myeloma. They thought she had been diagnosed several years earlier and was doing great. I didn't want to talk to anybody when I was diagnosed. But I did want to talk to Debbie.  I called her and it was as if 25 years had not passed. She was as nice and friendly as can be. She told me that she had been diagnosed 5 years early (let's say 2006). She said she was thriving, and simply taking a small pill every few days (Revlimid, which meant nothing to me at the time). Debbie told me that a lot of progress had been made in the fight against myeloma, and that it had become more of a chronic disease that could be managed.You can live a normal life with myeloma, she told me. She really put me at ease, I'll tell you that. Debbie's doctor was Dr Vescio at Cedars Sinai here in Los Angeles. Vescio had trained with Berenson years earlier. And while his approach was a bit different than Dr B's, he also was not 100% sold on the stem cell transplant. Debbie, like me, did have her stem cells harvested and frozen, but she never had a transplant.

About a year and a half ago, Debbie's numbers started to go back up. Her back began to give her problems. It seemed as if her myeloma had re-energized. Vescio apparently wasn't able to get a handle on it, and sent her to Berenson. Leslie and I ran in to Debbie a couple of times at Berenson's office. We went to lunch. She looked great. What cancer? But you could tell her myeloma related back issue was causing her pain.  Her attitude was still awesome. So positive. So caring. We'd check in with each other every so often. But a few months ago, I started not hearing back from Debbie. My calls and texts were not being returned. I heard that she had fallen, broke a bone and might have had a heart issue. I finally did talk her after she had gotten home from a hospital stay and she said everything was fine, nothing to worry about. That was the last I spoke with her. I sensed that she wasn't doing good, but didn't think it was critical. Uncle Jan said he hadn't been able to get in touch with her lately.

On Christmas day in fact, we mentioned that we needed to see her. Yesterday morning, the day after Christmas, I woke up with a bad feeling. I called Berernson's office and asked if they could tell me what's up with Debbie. They said she had passed away on November 28.  The man at Berenson's office who told me, said he had been good friends with Debbie and was really saddened by her loss. That's the impact she had. She loved everyone and everyone loved her.  Part of me feels like she separated herself from me over the past few months because she didn't  want me to see what myeloma can do. She was still protecting me. She didn't want my spirit to be broken.  To the very end, Debbie was thinking of others.

After hearing the news yesterday, I was in a funk the rest of the day. Sad that I didn't try harder to stay in touch with Debbie. When I'd see her at Berenson's office, she was by herself. She'd drive herself to his office despite the obvious pain in her back.  I hope Debbie wasn't alone when she passed away.

I'm 52. Getting older.  When I recently spent time with Seth in Minnesota, I told him I was ok with dying, if that's what happened, but I just didn't want to suffer and wanted to make sure I embraced life to the fullest.  I said I still planned on fighting and controlling the myeloma for a long time. But hearing Debbie passed away is a sobering reminder of what we're dealing with here. Serious business. I try not to think about it. What's the point?  I do feel like I am getting a little familiar with people dying from cancer and that trips me out a bit. I never would have thought this would be my life at the age of 52. Curious how things turn out.

When I first spoke to Debbie after being diagnosed. we joked about what we might have done in the 80s that led to us both having myeloma, a not too common blood cancer, with an unknown cause. There is some thought that exposure to toxins might lead to myeloma. If so, I can put together a lengthy list of possible toxic things I exposed myself to. We'll never know. Dr Berenson is doing research on whether Ashkenazi Jews are more prone to myeloma than other folks. Debbie and I are both Ashkenazi Jews. We'll never really know. I have my own theories.

The summary of all this is that Debbie put up a great 8 year fight against myeloma. She helped me. She touched countless others. She will be missed.  Rest in peace Debbie.
at December 27, 2013
Email ThisBlogThis!Share to TwitterShare to FacebookShare to Pinterest