Let's Spice It Up

I've been on maintenance and cruise control for probably a year and a half. Dex and velcade every other Thursday. Revlimid, every other day for days 1-15 of my cycles. It's been a reliable routine, one that I'm very used to and very ok with. Some of you might have been wondering: Hey Matt, where's the drama? Where's the intrigue? Where's the mystery? The blog had taken an hum drum turn.

Well, for those asking for some meat to chew on in terms of updates, here you go. About 4 weeks ago I started to feel achy. My whole body started to feel tight. It wasn't every day, but there were some mornings where it took a while to get moving. I referenced North Dallas Forty in one post. Then two weeks ago, at Phan's office for chemo, I had a low grade fever. 100 degrees. No big deal. Last week I really to started to feel like crap. After breaking out in a crazy sweat during a work meeting, I went in to see Phan He confidently said I had the flu.  So I slept for the next couple of days and by last weekend I was feeling pretty good. I mentioned we went up north. We went on a walk on the new Bay Bridge and my back really fricking hurt on that walk. Around the shoulder blades. Odd.

Monday night I had a 102 fever and crazy ass night sweats. Then yesterday at work, in a meeting, I broke out in a raging sweat again. I was soaked. Thank god for undershirts.

So today was Berenson. It's probably not the flu. Could be the myeloma or could be something else, He sent me to an infectious disease doctor ASAP. Here's a picture of all the tubes of blood they took. Oh plus four bottles which aren't visible. The doctor asked if I've been around farm animals. I was at the farm animal sanctuary in Woodstock and got pretty close to a whole bunch of animals, including, yes, goats. 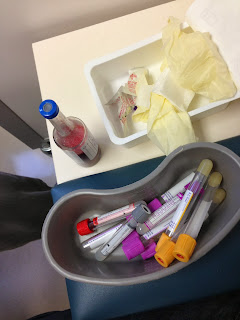 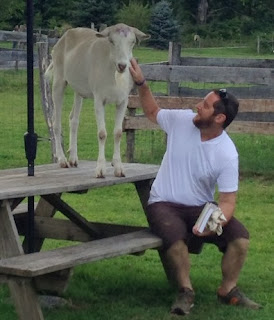 Tomorrow at 9, it's Dr Phan. Chemo is supposed to be tomorrow. Day 15 of maintenance. But that is off. Berenson and Phan talked while we were in Dr B's office. So I might get a bone marrow biopsy in Phan's office and then he'll send me out for a full body scan. I also need to do my 24 hour pee collection tomorrow. Basically, we're doing all the tests we did when I was first diagnosed. Ah, like a trip down memory lane. I'm thinking positive thoughts, but I have a sense what this might be. But we'll see. Tonight I'm eating cereal (Puffins) and ﻿having nice conversations with myself.
I'll keep everyone posted, but here's the intrigue you may or may not have been asking for.

at September 25, 2013
Email ThisBlogThis!Share to TwitterShare to FacebookShare to Pinterest